Getting To First-Base The Hard Way

Share All sharing options for: Getting To First-Base The Hard Way

There are many players in the majors who don't walk very much, and this tends to come through in their on-base percentages, unless they hit for sensational batting average (Ichiro comes to mind). Sometimes though, even a low OBP can be a little deceiving. For example - the player that inspired this post - Adam Jones.

Jones is still a relatively young guy with a lot of tools, but his lack-luster plate discipline has been his main Achilles heel. In 2010, he hit .284/.325/.442; putting up below league average OBP despite a batting average almost 25 points above. And yet even that low OBP doesn't tell the full tale of Jones' issues with patience at the plate, since a large part of his isolated OBP comes as a result of 13 hit by pitches (the 8th highest total in the majors).

Take them out - leaving Jones with only 23 walks (3.7% walk rate) - and his OBP would have been just .310. That's not to say that getting on base via the HBP is just a fluke - Jones did have 7 in each of his previous full seasons, and Craig Biggio famously bumped his on-base numbers by getting plunked a whole lot - but it does warp our conceptions of a player's skill set somewhat when just looking at his slash stats.


Here are the guys who got the biggest (relative) bonus from taking one for the team in 2010 (using HBP over HBP + BB to rank): 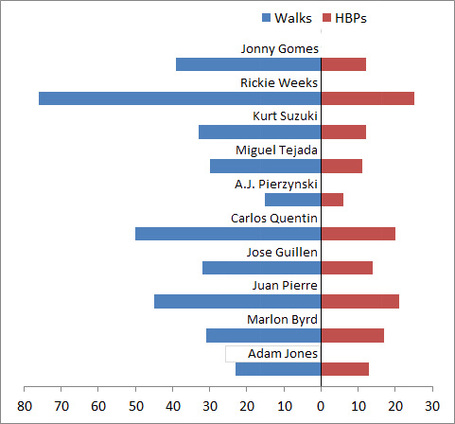 An Oriole lead baseball in at least one category last season*. Some of these guys never walk (Pierzynski** and Jones were 1 and 3 in lowest walk rate in the majors), while others just get hit a lot (Quentin and Weeks). According to Baseball-Reference's WAR batting runs, Pierre's 2010 season was the least productive ever for a guy who got plunked at least 20 times (-20 runs). (Jason Kendall shows up twice in the top 5 in that list).

** His name is longer than how often he works a base on balls! 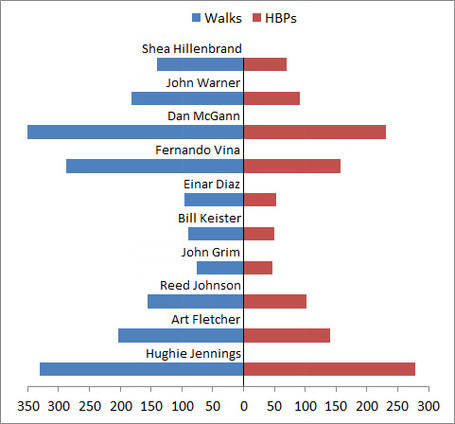 Jennings rarely walked but owns the record for most career HBPs (his 287 is just ahead of Biggio's 285 - what, no pitchers wanted to help Biggio get the record in his final couple years*?), and spent most of his career playing in the 19th century,

Fletcher, Grim, Keister, McGann, and Warner all like-wise played over 100 years ago.

Flash forward, and we have more familiar names like the still active Reed Johnson, who in his rookie season managed a rare 50-50 split.

While I appreciate the efficiency of going to first on one pitch instead of having to wait for four balls, perhaps it would behoove some of these guys to maybe take a few more pitches that aren't hitting them in the ribs.