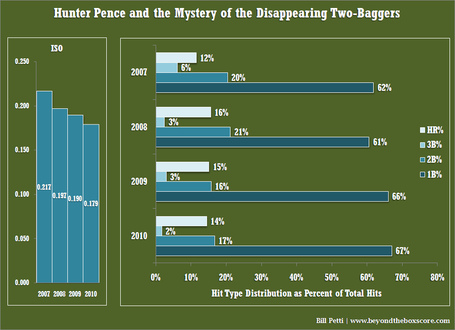 After the Bautista - Blue Jays deal was announced I checked in at MLB Trade Rumors to see who else is left in terms of arbitration eligible players and I noticed that Hunter Pence is this year's last man standing. Pence has asked for $6.9M and the Astros have countered with $5.15M. Since becoming a full-time player, Pence has accumulated 10.3 fWAR ($44.9M in value according to FanGraphs).

I won't get into what Pence should and will get (I'll leave that to others more qualified to break that down). However, a few things struck me about his performance when I looked into his statistics.

The most glaring is that his isolated power has steadily declined since his debut in 2007, plummeting 18% in four years (Slugging declined 17% over the same time). Oddly enough, Pence's decline wasn't caused by a lack of home runs--Pence hit exactly 25 each of the last three years. The culprit, it appears, is a drop in his doubles as a percentage of hits.

Why is Pence trading doubles for singles? Off the top of my head, I don't know. His speed score declined from 5.9 in 2007 to 5.2 in 2010, partially a reflection of less triples. Does that indicate an actual decline in speed? Not sure.

If any readers follow the Astros closely or have other theories as to where the doubles have done I'd be interested to hear your theories.