Share All sharing options for: Missing the Strike Zone Effectively: The odd case of Derek Lowe.

Cliff Lee is an amazing pitcher due to his amazing command of his pitches, which allows for him to avoid walks like the plague.  We can see that in a look at his wide-strike-zone rate - a statistic that shows how often that a pitcher's pitches hit a 2 foot-wide version of the strike zone - which was unsurprisingly the best in the majors last year, as you can see in the graph above.  In fact, Cliff Lee is clearly an outlier in how well he can and does hit the strike zone so often.

But what also sticks out in the graph above is that one pitcher seems to be the exact opposite of Cliff Lee....a pitcher who misses this wide zone on over 50% of his pitches!  This guy happens to be Derek Lowe, and as you can see from the above graph, he's an extreme outlier in this respect.   You can see this more clearly in the table below, which shows the lowest rates of hitting a wide strike zone and a smaller (more precise) version of the strike zone:

Table 1:  A look at the 5 pitchers with the lowest frequency of pitches hitting a wide-strike zone (minimum 1500 pitches).

Table 1 and the graph above involve only pitchers who threw 1500 pitches in 2010, but if you expand the pitch minimum to allow for relievers to show up, Lowe turns up at the bottom again.  And as you can see from the standard deviations above, Lowe's low frequency of hitting the strike zone is an extreme outlier - even more extreme of an outlier than that of Cliff Lee on the other side.  And it's not just this year, Lowe's been last in strike zone rate in 2009 and 2008 as well, though his strike zone rate has never before been as much of an extreme outlier as it was in 2010.

But this just seems odd:  while seeing crafty nibblers like Livan or Jamie Moyer on this list is not surprising, Lowe isn't one of those pitchers.  In fact, while those pitchers utilize non-fastballs frequently and are the type that never aim at the middle of the zone, Lowe is a sinkerballer: a pitcher who by definition relies upon a fastball and isn't known for hitting the corners, but simply for getting ground balls on contact.  Meanwhile, he's not known for having a high walk rate either (BB/9s under 3 each of the last 6 years.)

So what's going on here?  Why is Lowe missing so often and how come he doesn't have a large walk rate because of his failure to hit the zone?

Lowe throws 3-4 pitches:  A two-seam fastball (used 60% of the time against LHBs and 66% of the time against RHBs) hitting averaging only 88.4 MPH but with awesome sink (an average vertical spin deflection of +1.4 in 2010) and 9 inches of tail, a change-up/split-finger that averages 84MPH with a little more sink and less tail than the fastball (which used to be a rarity but saw increased use in 2010), a slider that averages 80 MPH, and what I think is a rarely used cutter that first saw use in 2009.  ALL of these pitches have poor strike-zone rates, with only the fastball against right-handed batters and the rarely used cutter against left-handed-batters hitting a wide zone over 50% of the time.  In other words, his low frequency of hitting the strike zone is not being caused by one outlier pitch that misses the strike zone at an extreme rate....rather, Lowe misses the strike zone with ALL of these pitches.

Lowe's missing of the strike zone, while avoiding of a high walk rate, is not caused by extreme numbers in certain pitcher's counts either, such as 0-2 and 1-2 counts.  Figures 1 below shows how much more Lowe misses the zone compared to the average pitcher in a specific count. 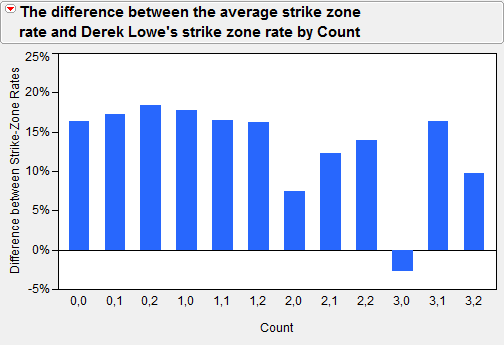 Figure 1:  The difference between the average pitcher's wide-strike-zone-rate at each individual count and Derek Lowe's strike zone rate at those same counts.

As Figure 1 shows, while on 2-0 counts Lowe does go more towards the normal rate of hitting the strike zone, he was still less "accurate" on basically every count than the average pitcher, and by a lot.  Note that while this trend appears to not occur in 3-0 counts, Lowe was rarely in those counts and thus this is an illusion of small sample sizes.

No what's happening here can best be explained by a few factors:

1.  Where Lowe locates his pitches:

Mike Fast mentioned this in his teaser unfiltered post on Tuesday, but Derek Lowe's pitches are the lowest in all of the majors on average.  You can see this in Figure 2, which shows heat maps demonstrating where Lowe located his pitches in 2010 to left and right handed batters:

Figure 2:  Heat Maps showing where Lowe located his pitchers against left and right handed batters in 2010.  The graphs are read from a catcher's point of view and the black rectangle represents a wide strike zone.

As you can see from the heat maps, Lowe really aims low and tries to aim away from both left and right-handed batters.  He does this more so against lefties, missing a regulation strike zone by over 6-8 inches not infrequently.  By Contrast, when Lowe aims at right-handed batters he's more close to the actual horizontal middle of the zone, and his misses against these batters tend to be more low than outside.

Now this use of the sinker makes sense....if you remember my article from a few weeks ago, against either type of batter, away and low is the best area for a two-seamer to get ground balls, and this does indeed allow Lowe to have a fantastic ground ball rate against both left and right-handed batters.  Thus while Lowe is being inaccurate, he's doing so in a way that's structured and not "wild," designed to maximize his ground-ball rate that he relies on to be a successful pitcher.   That said, Lowe is taking this theory to an utter extreme really....after all doesn't there have to be a trade off at some point where the increased ground balls come at the cost of throwing too many balls and walking too many batters?  How does Lowe avoid this?

The Answer:  Getting some help from the Umps and Batters:

Beyond the Box Score's own J-Doug has been running his terrific Benefit of the Doubt series for a while now.  And if you've been reading those pieces (which I hope you are), you may remember Lowe's name coming up.  According to J-Doug's work, Lowe has received a 7% zone advantage from the umpires, the 2nd largest among starters.  In other words, Lowe is getting calls on these pitches that would seem to have missed a regulation strike zone, in some cases by a good bit.

Mike Fast's terrific work at Baseball Prospectus this week reveals the probable cause for this:  Umpires are giving Lowe these calls because of the fact that the catcher is setting up his target in these low and away areas that are technically out of the strike zone.  The heat maps above should make it clear that Lowe's missing of the zone is almost certainly not because of wildness and missing his target, but because he targets these areas.  As such, the umpires, who would seem to rely upon the catcher target in their strike-zone calls, are giving Lowe a decent number of these pitches as called strikes.

In addition, batters are swinging at Lowe's pitches a little more often than they do on average.  This is true regardless of whether these pitches are in or out of the strike zone, as seen in table 2 below:

The advantage here isn't large, but it's notice-able and helps explain a little bit more how Lowe avoids a high walk rate.  It's likely of course that the higher O-Swing-rates are caused by the fact that the batters are just as fooled by Lowe's pitches as the umpires.  Alternatively, batters are swinging since they know they can't rely upon the umpires to make the right determination on whether the pitch is a ball or a strike.

Thus Lowe is able to avoid a super-high walk rate.

Against Right-Handed batters, Lowe's pitches have been effective, despite their lack of accuracy (for the most part), each of the last three years, though the pitches did experience a setback in 2009 (In 09, the swinging strike rates of his fastball and slider were half their normal amount for whatever reason).  Lowe's sinker gets a great GB Rate (59.22% in 2010) and actually has a good swinging strike rate of 8% in 2010 (though this could be a fluke).  Moreover, the slider, Lowe's primary off-speed pitch to these batters, has gotten amazing swinging strike rates (over 20%) in 2008 and 2010.

Against left-handed batters however, Lowe's extreme "inaccuracy" has a less rosy track record, and in fact his numbers were basically average in 2010 against these batters.  In 2010, Lowe "missed" away more than he had previously (though the change is subtle) and he also may have pitched a tiny bit higher.  The end result was a lower swing rate than usual and Lowe highest rate of balls on his sinker in the last three years (39.51% of Lowe's fastballs to lefties resulted in a called ball).  Meanwhile, remember, GB rates naturally tend to be lower against opposite-handed batters for two-seam fastballs...Lowe tries to suppress this split through his extreme low-and-away target, but his more extreme aim in 2010 resulted in his lowest GB rate over the last three years.

In addition, Lowe's other pitches, accounting for 40% of his pitches against these batters have not been effective really the last two years...resulting in balls over 40% of the time, not getting high swinging strike rates (the change-up in 2010 had a swinging strike rate of 11% and outside of the rare "cutter," that's been the best of these pitches) or always having a great GB rate.

Derek Lowe aims low and away to an extreme point, such that he is the most "inaccurate" pitcher in the major leagues over the last three years, and especially last year.  Lowe's able to do this thanks to some favorable umpire calls (due very likely to catcher targeting), some helpful swings from opposing batters, and his pitches being located in places where they're near impossible to hit effectively.   But because of this, Lowe is especially reliant on his peripherals (swinging strike rate, ground ball rate) staying high....as he's entirely reliant upon good results coming when batters swing.  Against left-handed batters...that may be a problem for him to do consistently.