Dave's post this morning comparing Jose Bautista to Rich Aurillia was really interesting. If you look at the rest of the WAR by age graph, though, it wasn't that Aurilia declined so much as he regressed toward his mean: 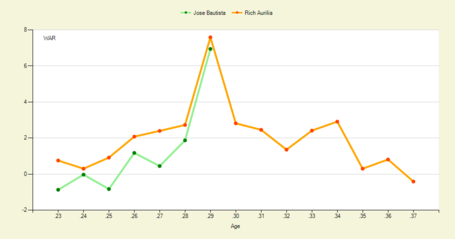 Aurilia's 7+ WAR was clearly an aberration, career-wise. The question is was it one the Giants should have seen?

So does Bautista exhibit these same red flags? Yes and no.

In the no column, Bautista suffered an abnormally low BABIP in 2010 (.233), which was 45 points lower than his previous 3-year average. So his lack of singles and OBP could simply be a function of this. A rebound back to the .270 range will help him in 2011 and beyond.

However, there are more problematic signs.

First and foremost, Bautista had (for him) an outrageous HR/FB ratio and jump in that ratio last year. He went from a previous 3-year average of 8.9% to 21.9%--a 146% increase. That jump more than doubles Aurilia's increase of 70% during 2001. While Bautista should gain from a regress to his more natural BABIP, the likely decrease in home runs will definitely hurt his value.

Furthermore, Bautista also experienced a nearly identical decline in his K% (11.5% decrease for Bautista compared to an 11% for Aurilia). A regress here could actually mitigate Bautista's likely gains from his natural BABIP, since the less balls in play the less he accumulates those extra hits and bases.

Both of these peripherals would give me pause in terms of Bautista. It's a good bet 2010 was his peak year. That's not to say he won't be a solid offense player or worth what the Jays extended him for, but an Aurilia-like regress is by no means out of the question.

*Data beyond this point was pulled from Baseball-Reference.