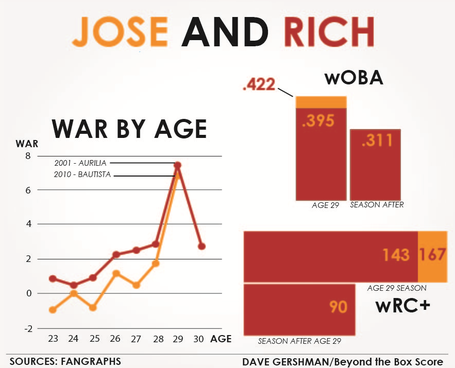 Just a little while ago, Jose Bautista and the Toronto Blue Jays came to an agreement on a 5 year extension paying Bautista $65MM. Last year, Bautista enjoyed a season in which nothing could have gone better for him. While leading the league in several offensive categories (like HR and TB), the Blue Jays knew that as his season improved, they'd be eventually discussing a long term deal and/or massive pay day with him. Thus, they somewhat did.

A while back, Rich Aurilia, the long-time Giant had a spectacular 7+ WAR season which in the eyes of many, was a sign of things to come -- the same signal that many got after Bautista's 2010 campaign. However, Aurilia would avalanche to a 2 WAR season the following year, creating the question as to whether or not something similar will happen to the man known as Joey Bats.

In the graph, the orange displays Bautista's fate/stats while Aurilia is represented by the color red. The most intriguing part of the WAR graph, in my opinion, is not so much Aurilia's downfall, but the size of it. Many reasons, such as Bautista's new contract, the strength of the AL East, and his ability to get on base via the single etc. could indicate the likeliness of a Aurilia-like downfall. Alas, Aurilia never had a season close to his 7.6 WAR year again. He would remain a mediocre player throughout the rest of his career despite his presence. Furthermore, Bautista fans should be worried about their slugger, especially with a contract like the one he received today.