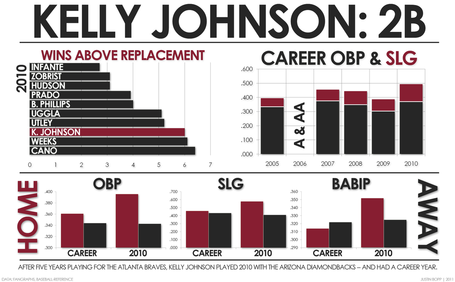 Who doesn't love a 29 year old 2-bagger that just hit 25+ home runs last season? Is defense even required up the middle when your team has a hitter like that? I'm fairly certain a team like the Royals would (should) take a Pepsi machine if it could slug like that, and they wouldn't even complain about the wrong change spitting out.

That is, of course, assuming that what you just saw wasn't a mirage (and that they'd actually let vending machines play baseball). For Kelly Johnson, a mirage may very well be the case. After spending the first 5 years of his career in Atlanta (and affiliates), a move to the Arizona Diamondbacks after ATL didn't renew proved to be quite a benefit to his career.

While Kelly was the 3rd-best second baseman per wins above replacement (FG), a closer look shows an extraordinary split that he's enjoying at Chase. Looking at the chart, note how his away splits in OBP, SLG, and BABIP are all relatively stable when comparing 2010 to his career averages* in each. But at Chase Field? OH MY.

Yesterday, Johnson and AZ avoided salary arbitration by agreeing to a 1-year, $5.85M contract. Moving forward, caution on the team's part is recommended.

**This analysis is in no way meant to disparage the many hard working and reliable Pepsi machines that serve our nation every single day.