When Do 10 Runs Not Equal a Win? Baseball Databank Data Dump 2.2

Share All sharing options for: When Do 10 Runs Not Equal a Win? Baseball Databank Data Dump 2.2 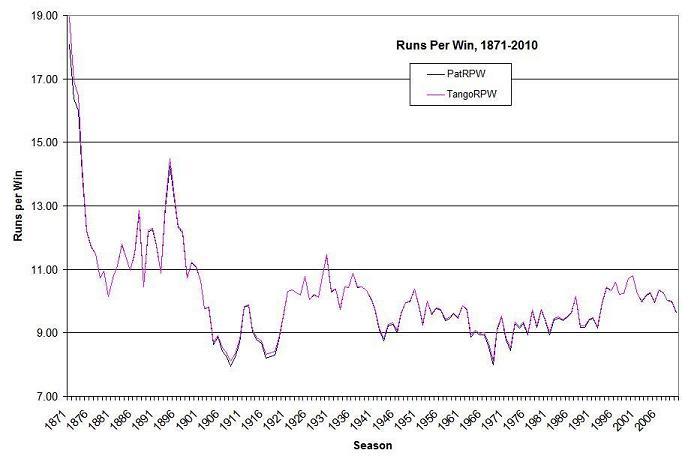 I tried to start this baseball-databank data dump series for myself last season, but it didn't take. I'm hoping to have better luck this season with shorter, and, uh, "dumpier" posts. So, for your breathless perusal (drum roll please)... historical runs-per-win conversions!

As common sense would tell you (and as you might infer from a basic of baseball history combined with the plot above), the more offense-oriented the run environment, the more runs it take to lead to a "win." I won't get into all the details here, as it's done well elsewhere (for example, at the Saber Library). There are different runs-per-win estimators ranging from from simply league runs allowed per game times two to PythagenPat. For the graph above and the data below, I've used two estimators: Tom Tango's relatively simple (lgRA*1.5)+3, and Patriot's more sophisticated PythagenPat: (lgRPG^(1-z)) * 2, where z is between 0.27 and 0.29 (last season I used 0.287, but Patriot has since told me that 0.28 has been found to  "work" the best, historically). PythagenPat is considered to be the most accurate, but as you can see above, Tango's simple conversion tracks it extremely closely, with a bigger difference at in more "extreme" environments.

But is 10 runs still a win? Taking baseball as a whole, yes, as you'll see. Even if I separate the 2010 leagues, the NL (where runs are more scarce) runs-to-wins overall conversion is still closer to 10 than to 9. Let's take a look at "modern times" (1947 to the present). 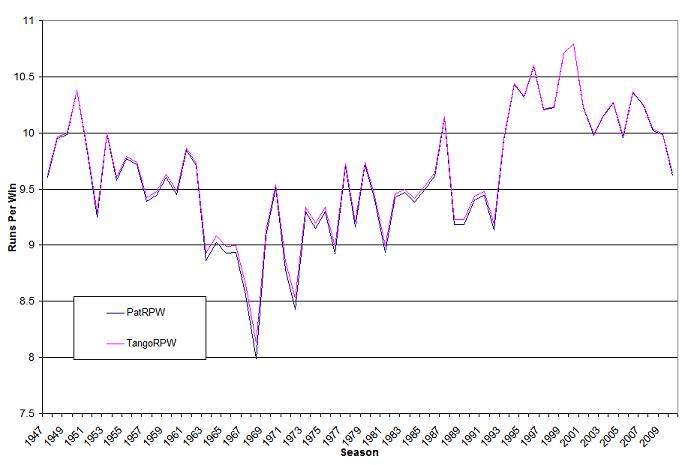 Both estimators see the last season a win was closer to nine runs than 10 was 1992. However, 2010 was closest since that season, at about 9.6 runs per win according to both estimators. It wouldn't take much of a drop to put it closer to nine than 10. In any case, to get a sense for how much of a difference between 9.6 and 10 runs per win makes, take a player who is 50 runs above average offensively. In a 10 rpw environment, that's worth ive wins. In a 9.6 rpw environment, that's worth 5.2 wins. I suppose it depends on how much accuracy you're after... Enough talk, here is the table (thrilling, isn't it?):