Swinging Strikes Are Good For Pitchers, But Not Bad For Hitters

Share All sharing options for: Swinging Strikes Are Good For Pitchers, But Not Bad For Hitters

I'm here today in an attempt to illustrate something you probably already know - it's really good if your pitcher can get hitters to swing and miss, but it's really not bad, necessarily, if your hitter swings and misses.  The chart below shows runs above average per 700 plate appearances plotted against contact rate for MLB pitchers, minimum 500 plate appearances, from 2002-2010.

As you can see, there's a solid correlation; r = .473 for runs above average and contact rate among the 1152 pitchers that qualified for this study.  If we look at hitters, it's a different story:

For hitters, there is a slight negative correlation.  R = -.204 for the 1412 hitters here, which says that the hitters who swing and miss the most are more productive than those who make a lot of contact.  And makes intuitive sense.  Think about the players who are going to lead the league in whiffing - guys like Adam Dunn, Ryan Howard, and Mark Reynolds.  They'll miss, but they'll also hit a ton of home runs.  The table below is a different way at looking something similar.  It shows the mean RAA for pitchers and hitters with a particular contact rate.  Keep in mind the relatively sample sizes at the extremes.

I think the next graph is important.  It shows the same data in the table, except with smaller class intervals.  The lines have been smoothed to better accentuate the trends. 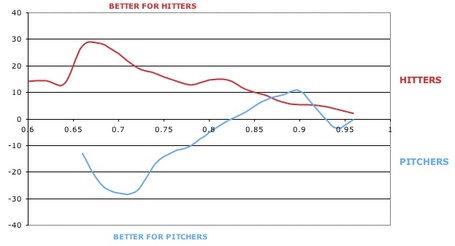 The large divide between the two lines at the left portion of the graph shows how low contact is often better for both pitchers and hitters.  Something that's extremely important to note is that by setting the minimum number of plate appearances at an approximate season's worth, we run into a bias - the guys that stick around for a season must have something going for them, and if they didn't, they'd be off the team.  So, definitely don't take this to mean that swinging and missing brings success for hitters, not that you would anyway.  The guys that can't make contact, walk, hit for average, or hit for power haven't factored into this sample.  If anything, take this to mean that among successful major league hitters, the ones who provide the most value typically also make the least contact.  For pitchers, it appears to be more simple.  If you miss bats with frequency, you're probably going to do better than a pitcher who allows a lot of contact.

The data here are courtesy of Fangraphs.

**ADDENDUM: I would have loved to do this without having the full-season sample bias, but I would also need enough plate appearances to make contact rate significant.  Any thoughts on how to improve upon this are greatly appreciated.