Aside from the Extremes, Pricing for Run Creators in 2011 is Pretty Volatile

Share All sharing options for: Aside from the Extremes, Pricing for Run Creators in 2011 is Pretty Volatile 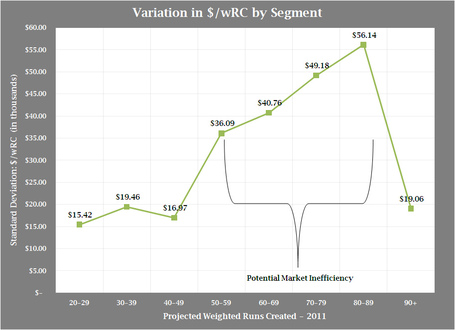 On Friday I posted a visual of 62 positional free agents that have been signed for 2011 and how cost effective they are likely to be in terms of projected wRC. As I mentioned, assessing who the biggest steals are likely to be in 2011 isn't as straight forward as looking at the graphic I posted. Why?

As mentioned on Friday, about 44% of the variation in $/wRC is explained by projected wRC--so to some extent the market is dictating that the better run creators command a higher premium for the runs they create. So a better way to assess bargains may be to look at players segmented by the range of runs they are projected to create. When we do that, we see some interesting patterns. More specifically, it looks like for 2011 the greatest uncertainty in terms of pricing potential run creation falls in between the extremes of below average and elite players*. The graph above plots the standard deviation of $/wRC for free agent position players for each of eight segments.

As you can see, the variation jumps dramatically for free agents projected to create between 50-89 runs (admittedly, the sample for each segment is small). To some extent this is intuitive, as we would assume it is easier to identify the below average talent and the star players--it's when we start trying to determine between C+, B-, B, and B+ players that it gets much harder.

And when it comes to identifying and signing players in the middle of the wRC spectrum, some teams appear better at it than others. 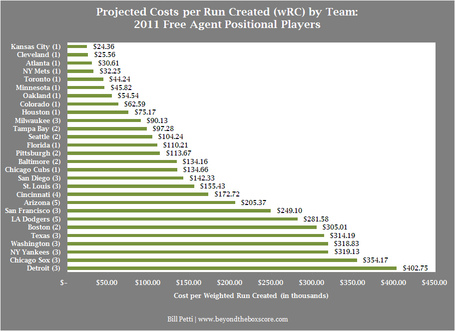 If we look at teams that signed two or more free agent position players this year, Milwaukee and Tampa Bay are projected to have obtained runs at the cheapest price, and they did so very differently.

For some prospective, Manny Ramirez should produce more runs than Ordonez and do so for a fifth of the price ($29K/wRC vs. $156K/wRC).

Now this doesn't tell the whole story, and of course this is all contingent on players performing up to Tango's projections. But I don't think anyone is surprised to see a team like Tampa Bay poised to capitalize on under priced talent.

*Defensive value isn't captured in wRC, so some of the apparent variation may be attributed to that for players like Beltre and Crawford.