Share All sharing options for: Pujols has Broad Shoulders 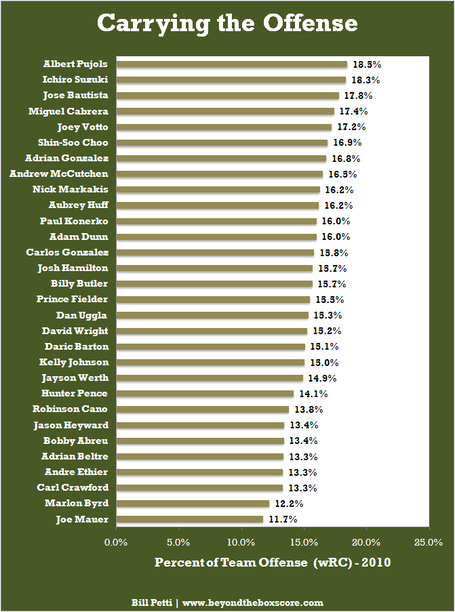 (Graph lists the leading run creator for each team. Click here to enlarge)

With the forthcoming announcement that Albert Pujols will shut down all contract negotiations with the Cardinals until after the 2011 season, commentators are lining up to pontificate on whether a deal will eventually get done.

This morning on Mike & Mike, ESPN's Tim Kurkjian said he believes the Cardinals have to sign Pujols as no other player means as much to his team as Pujols does. And in at least one, measurable way Kurkjian is right.

In 2010, Pujols shouldered the largest percentage of a team's offense in terms of his Weighted Runs Created (wRC), accounting for 18.5% of the Cardinals actual runs. And it isn't as if the Cardinals had a bad offense--they ranked 14th in baseball last year, 6th in the National League. The good news for the Cardinals is that they had two other players besides Pujols that individually accounted for over 10% of the team's runs created--Matt Holliday at 16% (11th overall) and Colby Rasmus at 10.9%. This is about average, as teams league-wide averaged 3.2 players that accounted for >=10% of team runs. (Here's a link to the top 25 regardless of team).

Still, if the Cardinals were to lose Pujols it would not be close to easy to replace his offensive contribution. King Albert has been the greatest run creator the game has seen over the past decade, 11% better than the next closest player. The prospect of paying any 41-year old player over $30M would be hard for any executive to swallow, but we aren't talking about any 41-year old.