Ever since Bert Blyleven was inducted to the Hall of Fame, I've been wondering who the best eligible non-Hall of Fame pitcher is. There are many different metrics you can use in an attempt to measure this. I decided to combine a whole bunch of them and see who the consensus pick is. 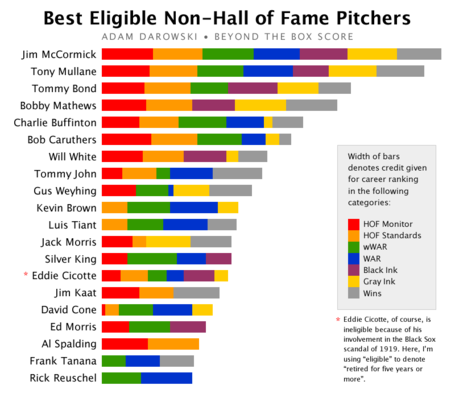 How did I do this?

I took seven metrics—a combination of old school (Wins, for crying out loud!), new school (WAR and wWAR), and those in between (HOF Monitor, HOF Standards, Black Ink, and Gray Ink). All stats were pulled from Baseball-Reference.com. For each metric, I pulled the Top 30 players not in the Hall of Fame (but have been retired long enough to be eligible).

I did an oh-so-scientific reverse scaling, giving the #1 guy 30 points and the #30 guy one point. I then added up all the scores to see who the consensus pick was.

And this is what I got.

Here's everyone with a score of 10 or more: