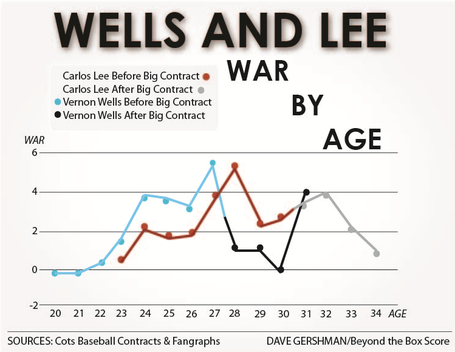 In the winter of 2006, both Carlos Lee and Vernon Wells were given a multi-year free agent contract and a multi-year extension, respectively. Carlos Lee inked a six-year deal that would pay him a guaranteed $100MM, and our good buddy Vernon was locked up for seven years, worth $126MM. Alas, neither player has lived up to the money in which he received, resulting in several long and hard years for their respective managements.

As Vernon Wells has been shipped out of Toronto, he is still being paid the remainder of that huge contract, a massive $86MM over the next four years. As for Carlos, he's owed $37MM over the next two years. All things considered, after a painful last four years of bad defense and lack of expected production for the most part, the Astros and Angels shouldn't expect either to come close to being worth what they're being paid.

Both GMs who were in charge when these deals were signed are no longer with those teams -- and there's little wonder why. This is an example of how a massive, bad contract can jepordize not only a team's payroll going forward, but the team's chances to win as well. Luckily for the Jays, they were relieved of Wells' albatross contract thanks to Tony Reagins and co. However, Carlos Lee is still doing his thing down in Houston.

Who will be the next player to underachieve performance wise shortly after inking a massive contract? Jayson Werth? Carl Crawford? Troy Tulowitzki?