Share All sharing options for: Fun with Salaries and Marcel Projections: Cost Efficiencies of Free Agents 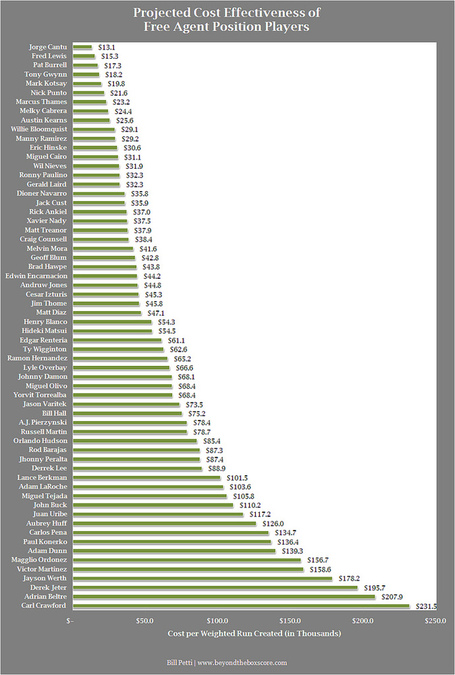 Tom Tango's annual Marcel projections were released last week. As I was already thinking about the cost of runs for teams I thought I'd take a look at those positional free agent signings over the winter and how cost effective they might be based on Tango's projections.

The graphic above lists those positional free agents that have been signed (n=62) and what their projected cost per weighted runs created (wRC) is likely to be based on their 2011 Marcel projections*.

To understand who the biggest bargains might be is more complicated than simply looking at the top of the chart since 44% of the variation in $/wRC is explained by projected wRC. What might make more sense is to look at bargains within segments.

The sortable table below sorts players from least to most expensive in terms of projected wRC for each segment:

What's interesting is that there seems to be greater uncertainty--and room to capitalize on market ineffeciencies--among certain segments of players and I'll be doing a deeper dive on this topic next Tuesday.

*For multi-year deals I simply took the yearly average. In some cases, a player's 2011 salary will be more or less than the average for their contract.