The Triple is Dead (and has been).

Share All sharing options for: The Triple is Dead (and has been). 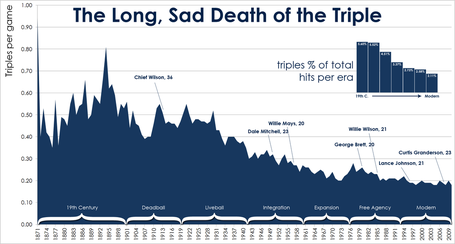 Click. Please, if you have children present, please open with caution.

Forgive me if I'm a bit contrarian, but no, home runs are not the most exciting thing in baseball. In that, our last generation got it wrong. There's little doubt that they're beautiful, in their own right. The timing, the moment, the crack of the bat, the silent, burning and invisible rocket trail it leaves behind, the quick check to see how the outfielder positions himself, the moment. The "aaaaaaaaaaah!" Home runs kick ass. We know that. But no, they are not the most exciting play in baseball.

Nor is a double play (though they are a thing of beauty with just the right mix of athleticism and difficulty), nor is a stolen base.

No, the most exciting play is a triple. It's the danger, I think. With a home run, the doubt is usually over before the batter gets to first, and while double plays often come down to a call at the plate, there's usually little question what should happen.

That's why triples are so sweet -- they shouldn't happen. As the chart shows, triples have slid into almost-never-happens territory, and we're lucky to see one every five games or so. There's a lot of reasons, from rule changes (which is often why pre-1901 ball is just ignored altogether) to ball changes, to defensive improvement to park adjustments. There might even be a touch of sabermetric analysis happening here and there, with the recognition that a sure double and no out is worth a bit (feel free to math this one, if you please) more than a triple that has a chance to create an out.

They shouldn't happen. Something has to go wrong.

Second, the glove. Triples are almost always a result of a lucky bounce (or unlucky if you're the outfielder), a bad glare from the sun, some defensive misalignment, and sometimes just bad defense. Oh man, he's not going to get to it...

Third, the speed. Triples at their very best are decent hits with bad defense, executed by batters with a ton of speed (we're talking "he looks fast" speed, not UZR range or eqBRR speed, though those no doubt help as well). There's always at least a split second where we look to the outfield and see the bobble or the muffed catch, and see the batter nearly to second, and then IT'S ON! RUN! HE'S GOING FOR IT! RUN!

Fourth, the relay. Now we're talking. Heart thumping, stand-in-your-seat excitement. The ball is in the air, halfway to the cut-off man. The runner is halfway to third. kk-THWACK. The ball hits the cutoff, ...RUN!... he turns. WHOOSH. He throws to third. IT'S CLOSE!

Fifth, the slide. The best triples make you wonder about life, while also helping you forget, if only for a moment. It's all right there. Man to man, ball-to-glove, foot-to-base. Did he beat the throw? You bet your ass he did. He's fast. What a feeling.

And now, the triple is all but dead. We can speculate (and I intend to) about the return of a more pitcher-friendly league over the next couple of years (bat diameter? please.) There's no speculation about the status of the triple though. It's dead.