Back of the Envelope: Mets Shouldn't Bank on Hitter Regress to Improve the Offense

Share All sharing options for: Back of the Envelope: Mets Shouldn't Bank on Hitter Regress to Improve the Offense 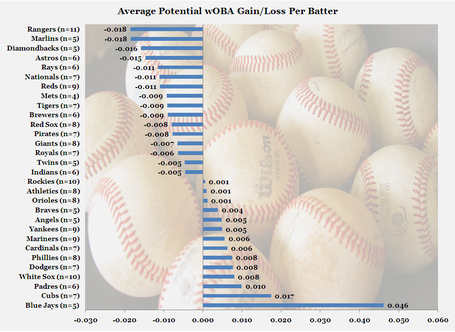 When you ask Sandy Alderson, the Mets new GM, how he can expect the team to improve next year without making significant moves to alter the roster--particularly on offense--his reply has been that many starters are likely to rebound from a down 2010. Certainly his answer is partly honest, partly political, but it naturally led me to ponder two questions: 1) to what extent he's right regarding the Mets, and 2) what other teams can expect their offense to improve (or decline) based simply on hitters returning to their natural talent level in 2011.

Using the data from the Batter Regress Tool I looked at all hitters currently on team rosters that had >=350 plate appearances in 2010 (this includes free agent signings and trades, but I am sure there are one or two errors and/or omissions). I then looked at the difference between each hitter's actual wOBA last year and their expected wOBA given their 3-year average xBABIP and K%. Finally, I grouped hitters by team to get a sense of what teams might expect a natural rebound/decline in 2011. The results can be seen in the graph above.*

Teams had between 4 and 10 hitters in the sample. So taking the second question first, who faired the best?

The Jays have the greatest potential to improve on offense--by a long shot--just based on hitters regressing to their average expected performance (and that's after unloading Wells). All five of their current players with >=350 PA's underperformed in 2010 relative to what we might have expected, with Aaron Hill leading the way with the potential for a natural .097 wOBA rebound.

The Rangers lie at the other extreme, with a potential decline of .018 wOBA per hitter. Hitters like Josh Hamilton (-.070), Nelson Cruz (-.067) and newly signed Adrian Beltre (-.040) lead the way in terms of potential decline.

And where do my Mets land? Basically among the bottom 30% of teams, with a potential .009 wOBA decline per hitter. Now, .009 isn't a huge number, but the fact that it is negative suggests that fans and management shouldn't expect the offense to naturally improve all that much.

David Wright turned in a solid season, with a .368 wOBA, but continued to rack up more strikeouts. Based on his expected BABIP for 2010, Wright should have turned in a much worse season (.339). If he continues to strikeout almost 30% of the time Wright could see his wOBA drop again this year. Since he's unlikely to replicate his magical .394 BABIP from 2009 over the long haul it will be quite difficult for him to make up the difference from so many strikeouts. If he regresses to his 3-year average in terms of K%, however, his likely line looks much better.

Jose Reyes had an expected BABIP in 2010 of about .291, but his actual BABIP was .301--so Reyes over performed, but only by about .008 wOBA. Given that his expected and actual 3-year average BABIP were identical at .309 he may improve, but regress alone doesn't indicate he'll become much better than a league average hitter unless he manages to rediscover line drives and home runs, not mention walks.

Additionally, players like Jason Bay (-.035) and Angel Pagan (-.023) hit better last year than one would have expected. Particularly for Bay, any improvement won't come from a higher BABIP (as he had an actual of .329, better than his 2010 xBABIP and 3-year average xBABIP), but instead the return of his natural power. It remains to be seen just how much of a rebound he will see.** Even with a healthy Carlos Beltran and an older Ike Davis I am not that optimistic that regress can improve on their anemic 656 runs scored all that much.

*The same caveats apply here as apply to the Regress Tool--this is back of the envelope as the title implies.  For example, it assumes a player's expected hit distribution is the same as their actual. In some cases, this might not be the case.

**Jerry Crasnick had a great piece yesterday discussing the various things Bay needs to do to see a rebound.