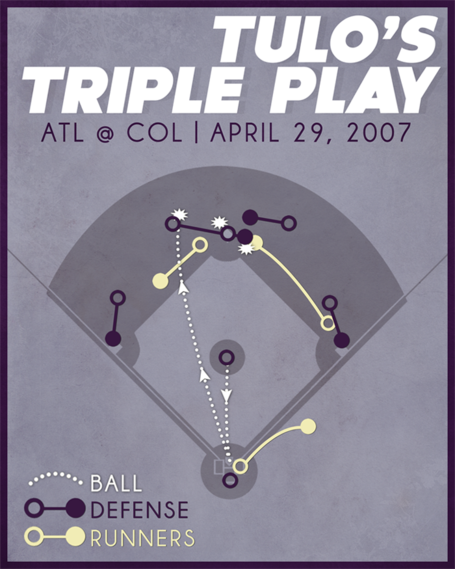 Let's go back to the day, where MLB.com describes how it happened (and MLB.com-exclusive video):

Rookie shortstop Troy Tulowitzki gave the Coors Field crowd something to cheer about Sunday, once they recovered their dropping jaws.

In the top of the seventh inning of a tied game, with runners on first and second, nobody out, and the count full, Chipper Jones hit a line drive at Tulowitzki, who snared the ball in flight, stepped on second to double up Kelly Johnson, and tagged Edgar Renteria between first and second for an unassisted triple play.

(that was his rookie year!) More:

An unassisted triple play is about as rare a feat as baseball can offer, and Tulowitzki has joined a legacy. Twelve have been turned in the regular season, and second baseman Bill Wambsganss turned one in the 1920 World Series. To put it in perspective with the game's other great rarity, there have been 17 perfect games pitched, including Don Larsen's in the 1956 World Series. Even the "natural cycle," hitting a single, double, triple and home run in order in one game is more common, having occurred 14 times in the big leagues.