TMI is quite simple. Just take the number of sacrifice bunts laid down by position players and add it to the number of intentional walks issued by pitchers*. To make the totals comparable for all managers, including those who were with a team for only part of the season (like Bob Geren and Bob Melvin of the A's), I've pro-rated all of the totals to 162 games. The higher a manager's TMI, the more traditional his managing style was in 2011. 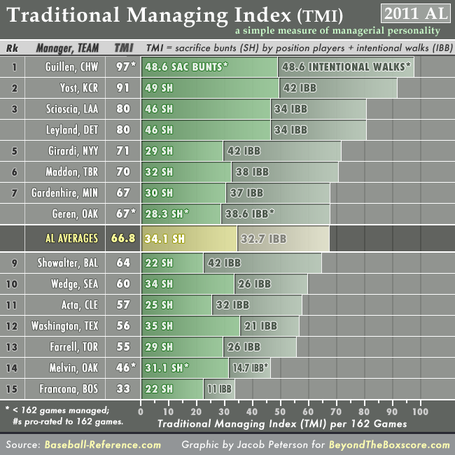 Here are a few of my observations about these results:

What do you think? Were any of these rankings a big surprise to you?

* I didn't count any plays that had a positive WPA (without an error by the opposing team); since the call to sac bunt or walk the batter increases a team's win probability in these cases, I'm assuming that any manager would have made the same decisions. These plays make up only a small portion of the data set: about 2% of the walks and 7% of the bunts.