Share All sharing options for: A Graphic Look at Replacing Runs in FA: San Francisco Giants 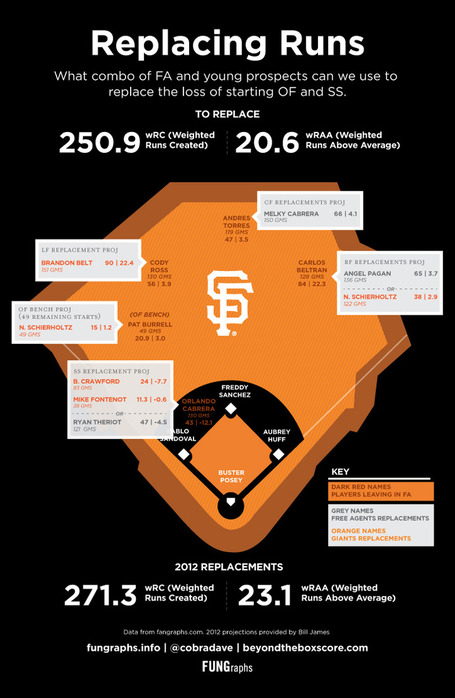 In the eighth graphic in the series, we look at how to replace runs the San Francisco Giants will be losing due to free agency. Similarly to their cross-bay rivals, the Oakland Athletics, they too are replacing their entire outfield.

Click after the jump to see how the Giants can stay competitive.

The acquisitions of Melky Cabrera and Angel Pagan has solved the 2 of their issues. With Brandon Belt playing a full season at LF, he brings production at that spot that wasn’t there in 2011. This might be a longshot, but if the GIants can bring in Jimmy Rollins, they’ll be solving some of their run production problems at a position where hitting is scarce.

2012 Projections based off of Bill James data on Fangraphs. ^ indicates improvement

Bringing in Cabrera and Pagan for the outfield could be good upgrades. Cabrera might not exactly repeat his 2011 production. He's going from Kauffman Stadium (13th in Runs and Hits) to AT&T Park (30th in Runs, 24th in hits). See Park factors info here. In addition park factors, his BABIP of .332 surely would most likely drop.