A Graphic Look at Gio vs Prospects

Share All sharing options for: A Graphic Look at Gio vs Prospects 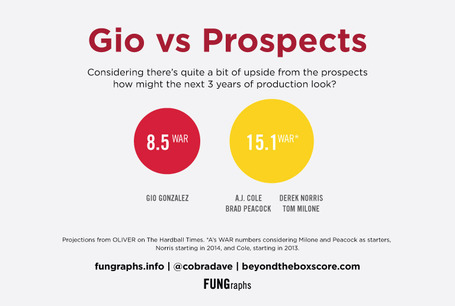 Rumored for a few days now, The Nationals won the Gio Derby. Gio Gonzalez for A.J. Cole, Brad Peacock, Derek Norris, and Tom Milone. Like the Cahill trade, this one is all about windows. The Nats can compete for the wild card and division now, while the A's are still rebuilding to compete in time for a stadium decision.

Is this a good deal for both teams?

The prospects total WAR is derived from assuming both Peacock and Milone become back of the rotation starters in 2012, Cole starting in 2013, and Norris becoming a starter after Kurt Suzuki's contract is up in 2013 (he has a 2014 club option for $8.5MM).

Of course this is considering that the prospects the A's got will live up to expectations, in which case this sure does look like a good deal for Beane.

Here's some links for reference just to see what the A's are going to be working with.