A Graphic Look at Replacing Runs in FA: Pittsburgh Pirates

Share All sharing options for: A Graphic Look at Replacing Runs in FA: Pittsburgh Pirates 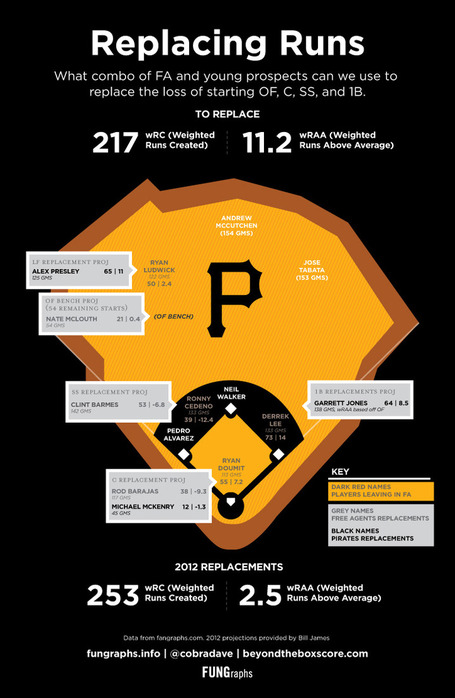 In the seventh graphic in the series, we look at how to replace runs the Pittsburgh Pirates will be losing due to free agency. While not really hit as hard as some teams we've covered, there's 4 position players to be replaced, and one of these at least, catcher is one that might be harder to replace due to lack of run production at that position.

Click after the jump to see how the Pirates can stay competitive.

Pulling the trigger early into the FA period on Clint Barmes was a definite upgrade from Ronny Cedeno, he is the 3rd best SS available after Reyes and Rollins. The Rod Barajas signing filled the gap left by Ryan Doumit. Moving Garrett Jones to 1B and would hopefully displace some of the lost power from Derrek Lee.

Originally, I had high hopes of Josh Willingham here in LF providing some extra pop, but Alex Pressley will be able to provide a portion of that power at a very very small price, in fact, even being an upgrade to Ryan Ludwick.

2012 Projections based off of Bill James data on Fangraphs. ^ indicates improvement