A Graphic Look at Why Kubel?

Share All sharing options for: A Graphic Look at Why Kubel? 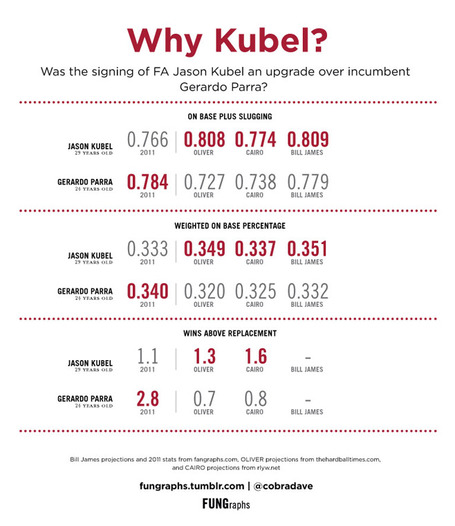 Does this signing even make sense? Our own Julian Levine asked that question after the announcement of the Jason Kubel agreement with the Diamondbacks. Originally, I had thought this was a great signing, and added some extra power in LF. Of course, taking an extra look, I wasn't so sure, especially seeing that Gerardo Parra had similar production for the league minimum salary (see Cots Baseball Contracts). So the question is, did the D-Backs really upgrade with this move?

Looking at these datasets (these were the three I could project with using OLIVER, Bill James, and CAIRO data):

Kubel seem to be a small upgrade in terms of OPS, wOBA and WAR. Something I was approached about was whether Parra's defense is superior and would cover his slightly lower WAR numbers.

Now looking at these two sets of numbers together, it appears that unless Kubel repeats his 2009 season performance, this wasn't such a good deal after all. It's apparent that while Kubel's value may come in power (0.239 ISO in 2009) and ability to get on base, Parra's defense is of more value to the D-backs.

Click on the image or here for full size graphic. Check out FUNGraphs.tumblr.com or follow me @cobradave for more.