A Graphic Look at the Remaining FA Starting Pitching Available

Share All sharing options for: A Graphic Look at the Remaining FA Starting Pitching Available 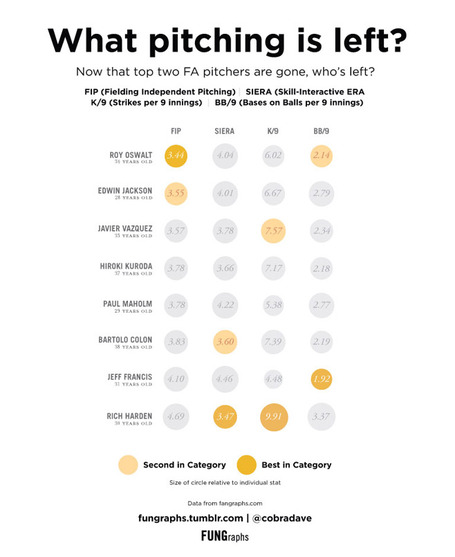 What seems to be a lackluster FA market pitching market, there are a few more gems available. Roy Oswalt seems to be the next one to go, but Edwin Jackson's name has been mentioned, partially due to his similarities to Gio Gonzalez. For a better look at the whole list, Over the Monster took dive into this last week.

Who's the best available? See after the jump.

Lets take a look at the comparisons to C.J. Wilson and Mark Buehrle.

Considering Wilson was by far the best out of this bunch, Buehrle was known to be the second to go and got his 4/yr $58MM. The guys on next up would surely cost less than that, but they produce similar results, with less hype.

Roy Oswalt and Edwin Jackson might not seem like a surprise, but Rich Harden might be. With a SIERA close to C.J. Wilson and higher K/9 than everyone, he might be a bargain barring injury concerns. His BB/9 is high, but hopefully his high K-rate balances that out.

Which one of these remaining guys would you want added to your rotation?