Anthony Rizzo and the Padres Interest in Matt Garza

Share All sharing options for: Anthony Rizzo and the Padres Interest in Matt Garza

The rebuilding Padres stole the baseball headlines yesterday, acquiring a box of goodies for their young and cheap ace, Mat Latos. The Reds, in search of a young starter the entire off-season finally struck gold but payed the price as they dealt top prospect Yasmani Grandal to the Friars along with Edinson Volquez, Yonder Alonso and Brad Boxberger.

San Diego displayed submission here, getting rid of arguably the most valuable player on the team in exchange for upside, position depth and a four-star prospect. However, now things are getting weird as we learned earlier today that the Padres have interest in Matt Garza in a potential Anthony Rizzo swap with the Cubs.

Garza, a five-win pitcher in 2011 is coming off a career year for Chicago. Posting the lowest FIP of his career (and the only one with a FIP south of 4.00) and improving his K rate while sporting a .306 BABIP, it's clear his success wasn't a fluke. With non-drastic HR/FB numbers throughout his career Garza could potentially improve by taking advantage of spacious Petco, and you can tell by the image below. 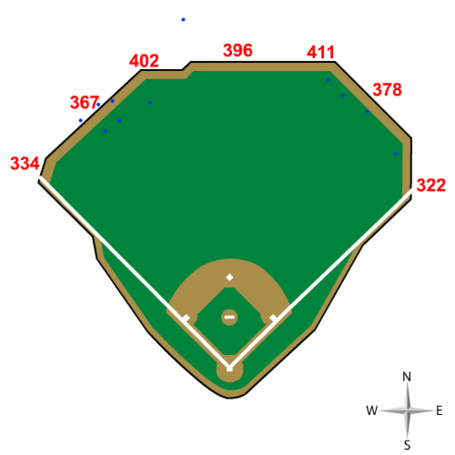 There shouldn't be any reason why the Padres are attempting to acquire Garza just after trading Latos, especially if it takes a prospect like Anthony Rizzo to get the job done. If the Latos trade tells us anything, it's that the Padres plan to continue re-stocking a strong farm system in preparation to compete two or three years down the line, which is also when Garza becomes a free agent. It just doesn't make any sense unless the Padres plan on bringing up the farm in 2012 and make a strong attempt to compete for the West.

Josh Byrnes knows better than to rush the farm and try to compete prematurely, and he should also know that Anthony Rizzo can bring back different and possibly more valuable pieces than Garza. I suppose the Friars could potentially flip Garza elsewhere after acquiring him, and although that wouldn't be silly, they might be in line to get the most possible value in return by dealing Rizzo.

For a team like the Padres, nabbing someone like Brett Jackson would be a better solution, considering he's someone for whom the Padres could use more efficiently than Garza based on upside, value and team control. But the Padres don't have to do business at all with the Cubs. In the summer of 2010, the Blue Jays traded their top first-base prospect, Brett Wallace, to the Astros for top outfield prospect Anthony Gose. A team like the A's who are in desperate and apparent need for a top first-base prospect could be a match and have prospects like Grant Green or Michael Choice to net the Padres. Others who could engage in talks for a first-baseman include the Rays, Brewers, Blue Jays and Cardinals, just to name a few.

The Friars could also deal Alonso, who at this point has less value than Rizzo, and such an acquisition would seemingly even out considering the Pads would be keeping the better first-baseman. But with all things considered, Josh Byrnes is crazy if he thinks acquiring Garza for Anthony Rizzo is a smart idea. Trading Latos only to acquire Garza doesn't make any sense, but stranger deals have certainly taken place.