Share All sharing options for: The Hitters Who Spent The Most Time At The Plate In 2011

Earlier this week, Jeff Sullivan of Baseball Nation wrote about FanGraphs' new Batter Pace statistic, based on PITCHf/x timestamps. Pace, in this context, is just the measurement of the average time that elapses between two pitches.

Sullivan's post got me wondering: which hitters were at the plate for the longest cumulative time in 2011? On the one hand, players who hit at the top of the order would accrue more PAs, and thus more time at the plate. On the other hand, those top-of-the-lineup hitters were also the ones who tended to have the fastest paces.

The left column of the graphic below shows the 8 hitters who were at-bat for the longest total time. I also included some other players (with a similar number of PAs) in the right column. By comparing the players in the two columns, you can get a sense of how much a hitter's pace can affect his total time on the field. 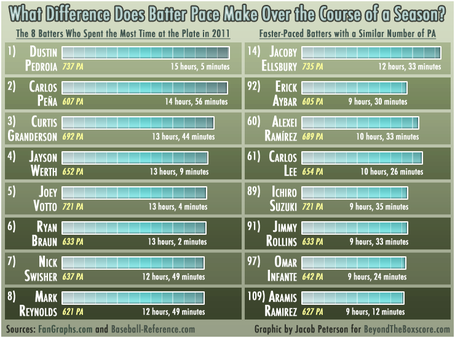 As you can see, some hitters with a similar number of trips to the plate nonetheless had huge differences in total time at bat. In the most extreme case, Carlos Pena was at bat for nearly five and a half more hours than Erick Aybar. Over a full season, differences of two to three hours are fairly common.

The top 2 hitters in terms of length spent at bat, Peña and Dustin Pedroia, were far ahead of the pack. In fact, the gap between Pedroia and 4th-place Jayson Werth (1 hour, 56 minutes) was larger than the gap between Werth and the 45th-place hitter, Miguel Cabrera (1 hour, 55 minutes).

It is interesting that Peña and Pedroia were so close together. Pedroia had 21% more plate appearances but spent only 1% more time at bat. Whereas Peña had by far the highest average pace among qualified hitters (28.4 seconds), Pedroia combined an above-average pace (23.3 seconds) with an MLB-leading number of plate appearances and a tendency to work the count.

Many of the hitters with the slowest paces didn't have particularly long cumulative totals, either because they had relatively few PAs or because they didn't work many deep counts. An example of the former is Juan Rivera, who ranked just 98th in cumulative time at the plate (9 hours, 24 minutes) despite having the 7th-slowest pace (25.2 seconds). Troy Tulowitzki had a good amount of plate appearances (610) and the 4th-highest pace (25.8 seconds) but ranked just 38th in total time at bat because he saw just 3.64 pitches per PA.

Curtis Granderson had just an average pace (20.8 seconds) but still ranked 3rd in cumulative time thanks to a ton of PAs and a very high number of pitches per PA (4.44).

Overall, 28 hitters batted for at least 12 hours this past season. Of those, 4 were Red Sox and 4 were Yankees. That probably won't surprise anyone.

Also unsurprising is that Delmon Young was batting for the shortest amount of time of the qualified hitters, coming in at just a few ticks above 7 hours. This is unsurprising both because Young barely qualified (504 PAs, 2 more than the cutoff) and because he's a well-known free-swinger.

If you want to know the total time on the field for any other qualified hitter, just let me know in the comments below.