Screwed by the Hall of Fame Voters

Share All sharing options for: Screwed by the Hall of Fame Voters

We all have our favorite Posnaski article, right?

In 2010, Poz wrote an article comparing the Hall of Fame to the Hall of Merit. This was around the time that the idea of the Hall of wWAR was festering. I refer back to this Poz article quite a bit. Today I want to expand on one particular quote from it:

(He goes into detail after that, and I'll include the full quote after the jump.)

Through the Hall of wWAR, we have identified a list of players who belong in the Hall of Fame. Now it’s time to take a look at which teams are getting screwed the most by the Hall of Fame voters. I took the 64 players who belong in the Hall, according to wWAR. I then trimmed the 19th century players from the list (since franchises were far more voaltile back then). Then I removed banned players, since it wasn’t the voters who rejected them. We are then left with a list of 44 players.

Teams are ranked by the total WAR produced for them by the 44 players on that list. Hover over a bar for a list of players who produced 10+ WAR for that team. 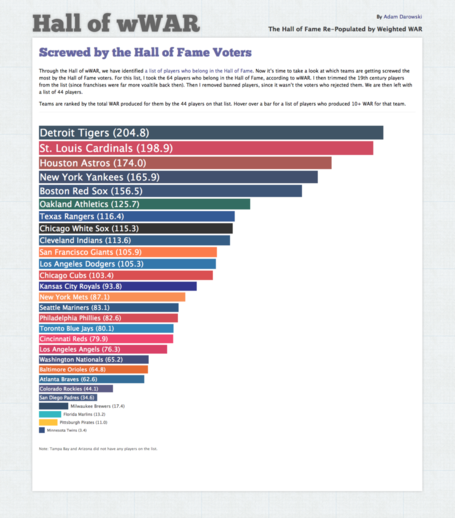 First, here's the rest of that Posnaski quote:

Here's what I mean: From 1967 through '72, the Detroit Tigers won a World Series and a division championship. They won 90-plus games four times. They were obviously very good. But the only Hall of Fame semi-regular on those teams was the aging Al Kaline, who was obviously still great but never played more than 133 games in any season. And it's not like those teams did not have Hall of Fame candidates. Norm Cash punched up a 139 OPS+ in a 2,000-plus game career -- in fact, Cash has the highest OPS+ of any eligible non-Hall of Famer with 2,000 game (Edgar Martinez, though, will probably pass him this year). Cash got almost no Hall of Fame support -- six votes his one time on the ballot.

There was Freehan, too -- brilliant defensive catcher who could hit. Bill James ranked him the 12th best catcher all-time in the New Historical Abstract. No Hall of Fame support.

Mickey Lolich does not seem like a slam dunk Hall of Fame candidate, but he did win 217 games, he was legendary in the 1968 World Series, and in 1971 he threw an absurd 376 innings, which is more than any pitcher had thrown since the Deadball Era (the next year Wilbur Wood would throw 376 2/3 innings to top him). Lolich at least stayed on the ballot for a while, but after an early 25% peak he faded badly and got just 5.2% in his final year.

OK. Now, from 1983 through '88, the Tigers won a World Series and a division title, and won 87 or more games five times. They were obviously very good. There is not one player on those teams who is in the Hall of Fame or is likely to get there any time soon (unless the Jack Morris wave starts to crest).

And we all know that the Tigers had some excellent players, Hall of Fame-caliber players. We'll talk about a couple of them in a minute -- Alan Trammell and Lou Whitaker are both in the Hall of Merit. I don't support Morris' Hall of Fame case, but he did win 250 games and pitch a phenomenal World Series Game 7 in 1991 after moving to Minnesota.

My point is: Do the voters have something against Detroit?

My visualization seems to back Posnanski's theory up. Whitaker, Trammell, and Freehan are lifelong Tigers who are in the Hall of wWAR, but not the Hall of Fame. Darrell Evans (also in the Hall of Merit) and Frank Tanana played significant portions of their career in Detroit and missed the Hall of Fame (but find their way into the Hall of wWAR). Norm Cash isn't in any of the three Halls, but his production (72.1 wWAR) rates ahead of many, many Hall of Famers and almost gets him in the Hall of wWAR. Lolich (66.6 wWAR) and another lifetime Tiger, reliever John Hiller (67.4 wWAR), come relatively close. Hiller is the best eligible reliever outside of the Hall of Fame (and actually has a wWAR total exactly the same as Bruce Sutter). Chet Lemon (66.9 wWAR) also spent quite a bit of time with the Tigers.

Then there's Jack Morris! Personally, I don't think he belongs in the Hall of Fame (his 54.0 wWAR puts him just 0.6 ahead of Tom Candiotti). But he is one of the mostly contested Hall cases and sits on the outside for now.

So, are the Tigers being screwed by the Hall of Fame voters? Well, yes. Consistently.

They're not alone, though. The Cardinals are actually much closer than I thought. With an all-time lineup that boasts Ken Boyer, Ted Simmons, Keith Hernandez, Joe Torre, and Mark McGwire, they have a ton of severely underrated players. McGwire, of course, is an interesting case. He's not necessarily underrated. His case is receiving push-back for… other reasons.

I was surprised to see the Yankees and Red Sox in the Top 5. Of course, there's another side of a study like this—the players who are overrated by Hall voters. The Tigers would suffer a small hit since wWAR feels Heinie Manush and George Kell don't belong. But those two would not get very far in negating Detroit's egregious oversights.

Oh hey, if you're into web development or just want to see how something like this is built, I've open sourced this visualization and the rest of the Hall of wWAR on GitHub.