Now that I'm done with the True Team series, I'm going to analyze the results. If you're unaware of this series, here are the links to the posts. The methodology is explained there.

The first thing that became blatantly obvious was that teams that were established around 1900 had a huge advantage in this series because of the advent of free agency in 1975. Here is that proof in graph form: 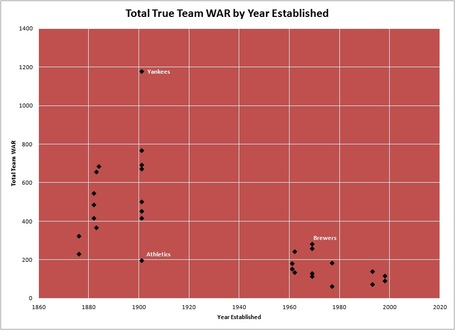 You can also see how much better the Yankees team is than all the other teams.

Now, if we take the best eligible players and create a team out of them, this is the result. For this team, I did try to keep players at their original position. The only place this really affected the team was at catcher. There were three other players who didn't make the team at all (Chipper Jones, Luke Appling and Jeff Bagwell) who have a higher career WAR than the starting catcher, Johnny Bench.

There are players from fourteen different teams, including four Yankees and three Red Sox. The best True Player is Ted Williams by half a win over Stan Musial. The lone active player on this team is Mariano Rivera. With the exception of the relief pitchers, all of these players are in the hall of fame.

The relief pitching position was a weakness for almost every team. Here are the averages for each True Team position: 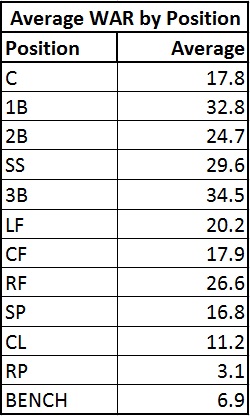 Finally, there were nine Mr. Teams named in the series. I also tried to name honorary Mr. Teams for those who are known as such. 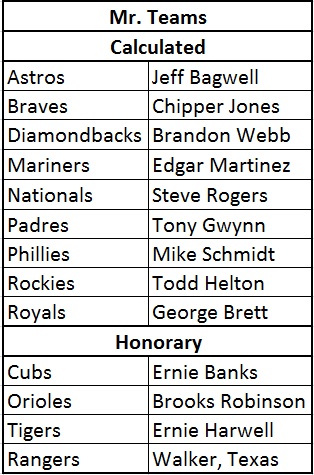 I hope you enjoyed this series as much as I did. I realize the strict rules removed a lot of players from contention, but it provides another opportunity to re-do this. Maybe each SBNation blog can come up with their own True Team. If nothing else, maybe it reminded you of a player long forgotten.

Whatever your reason for following along, thank you for doing so. I hope this provided a little baseball conversation for you during the off-season. I know it has for me.