Share All sharing options for: wWAR vs. Graham Womack's Hall of Fame Project

Earlier in the week, Graham Womack of Baseball Past and Present posted the results of his second annual Hall of Fame poll. Graham asks readers and fellow writers to vote on the best players not in the Hall of Fame. As you could guess, I couldn't let this pass without covering it in detail (I wrote about last year's version, too).

Since a picture is worth a whole bunch of words or something, here is an interactive visualization of the Top 50 players on Graham's list, along with their wWAR bars. 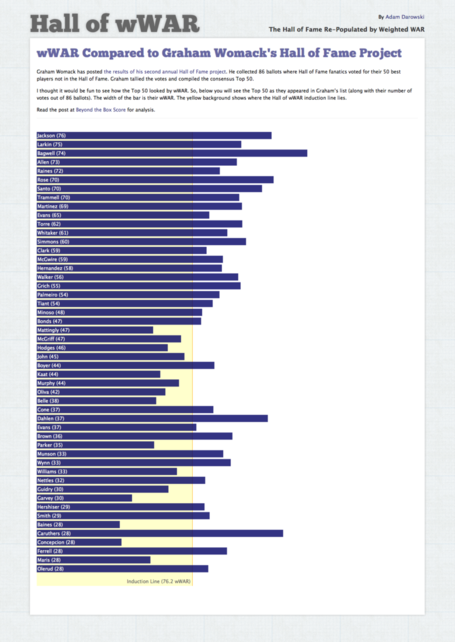 For the first 20 or so players on the list, we're in pretty good harmony. Graham conducted his poll when Ron Santo was not yet a Hall of Famer, so that's why we see him here.

From #22 to 31 is where we start to see a good amount of disagreement. Don Mattingly, Fred McGriff, Gil Hodges, Tommy John, Jim Kaat, Dale Murphy, Tony Oliva, and Albert Belle are all in this group. Each falls short of induction to the Hall of wWAR. Among this group, the best cases (according to wWAR) are John, McGriff, and Murphy.

It isn't terribly surprising that the best players (by wWAR) not included in the top 50 are dominated by 19th century stars:

Beyond the Top 30, there's a mix of agreement (Wes Ferrell, John Olerud, Orel Hershiser, etc.) and disagreement (Steve Garvey, Harold Baines, Roger Maris, etc.). In all, 35 of the 50 players on the list are in the Hall of wWAR.

Want to know who my Top 50 were? Just take the top 50 from the Hall of wWAR (that's from Bagwell to Stieb, since Spalding and McGraw weren't eligible for Graham's list).