Last week, I revealed the results of the Traditional Managing Index for the American League. This week, I focus on the National League.

TMI is quite simple. Just take the number of sacrifice bunts laid down by position players and add it to the number of intentional walks issued by pitchers*. To make the totals comparable for all managers, including those who were with a team for only part of the season (like Edwin Rodriguez and Jack McKeon of the Marlins), I've pro-rated all of the totals to 162 games. The higher a manager's TMI, the more traditional his managing style was in 2011.

Here are the TMI results for the 18 NL managers to manage at least 50 games. One manager blows away the field. 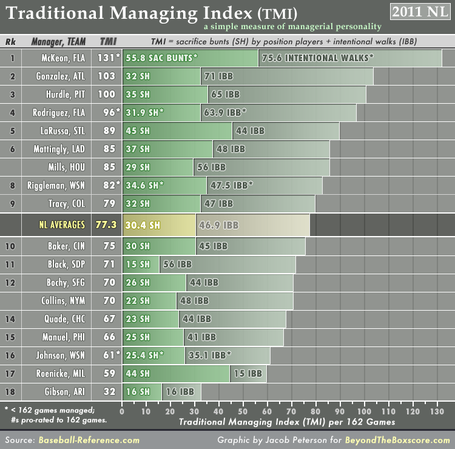 In the next few months, I'm hoping to go back into the past and see just how stable TMI is from year to year, especially for managers who switch teams. I'd also like to see if managers tend to get more traditional as they get older/have more experience. And of course, I'd like to see if my hunch that leaguewide TMI averages have been declining in recent years is correct.

Do you think TMI accurately represents the "traditionalness" of your favorite team's manager? Are there any other topics that you would like to see me research using TMI?

* I didn't count any plays that had a positive WPA (without an error by the opposing team); since the call to sac bunt or walk the batter increases a team's win probability in these cases, I'm assuming that any manager would have made the same decisions. These plays make up only a small portion of the data set: about 2% of the walks and 7% of the bunts.