Active Players Who Have Worn At Least 8 Different Uniform Numbers

Share All sharing options for: Active Players Who Have Worn At Least 8 Different Uniform Numbers

Some players wear a single number for so long that it becomes irrevocably associated with them. Mickey Mantle is 7, Cal Ripken is 8, Chipper Jones is 10, and so on. Other players, though, aren't so lucky.

Here are the active players who have worn at least 8 different uniform numbers. Some of these players might not be active for much longer, but I don't think any have announced their retirement yet. 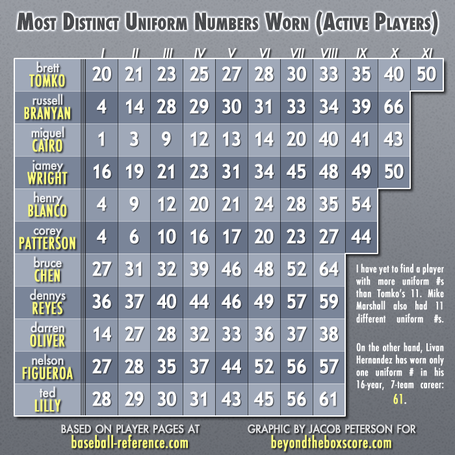 It certainly helps to play for a lot of teams, but that alone is no guarantee. For instance, no one in history has played for more teams than Octavio Dotel (12 and counting), but he's "only" had 5 uniform numbers. And Livan Hernandez, as the graphic mentions, has played for 7 teams but managed to keep the same number throughout (thanks to that number being rather unusual by baseball standards).

Several players are threatening to crack this list, with 7 uniform numbers each, including Carlos Peña, Ross Gload, Wilson Betemit, Mark Kotsay, and Rod Barajas. All of those players are free agents, so they could easily be forced into a new number next season.

No matter who ends up joining, this is one club that will never say "no Tomkos."