Share All sharing options for: A Graphic Look at Replacing Runs in FA: New York Mets 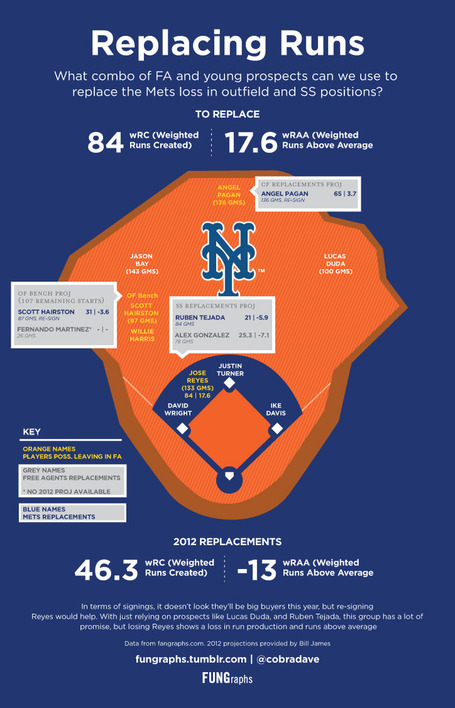 Updated: I know it was crazy to try to put Bay in CF, so lets keep him in LF and resign Pagan for CF.

In the second graphic in this series, we look at how to replace runs the New York Mets will be losing due to free agency. Assuming that the Mets do not re-sign Jose Reyes and decide to promote internally, this makes sense for a team trying to trim payroll and rebuild with young talent. They have all the right pieces, especially with Ike Davis back. Resigning Angel Pagan in CF and Scott Hairston as a backup would allow limited change in personnel.

Instead of just using runs scored straight up, I've used wRC (weighted runs created) and wRAA (weighted runs above average) to get a more accurate reading. 2012 projections are from Bill James data on Fangraphs:

For Reyes' replacement, promote Ruben Tejada and sign a free agent like Alex Gonzalez as a backup.

The previous graphic for the Oakland A's can be viewed here.

Click on the image or here for the full size graphic. Check out FUNGraphs.tumblr.com or follow me @cobradave for more