A Graphic Look at Redefining Most Valuable

Share All sharing options for: A Graphic Look at Redefining Most Valuable 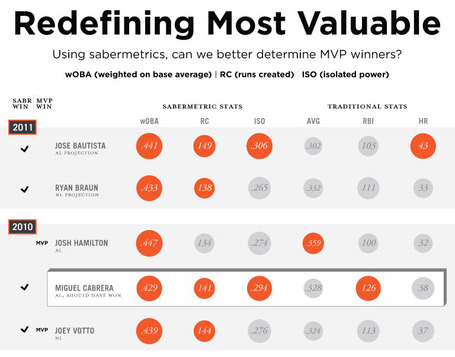 Using sabermetrics, is there a better way to determine the Most Valuable? I know, there's WAR, but taking a look at the winners from 2000-2010, most winners have been leaders in two out of three of the following categories:

Were there exceptions to the rule? For full-size graphic, click the image or here.

The only exception to this rule was Vladimir Guerrero in 2004, who only lead in Runs Created.

So who got snubbed? The most recent was Miguel Cabrera last year and Manny Ramirez in 2008. I know, it's highly debatable right?