A large number of MLB players, managers, and other figures go by a name other than their real first name. In most cases, the unofficial first name is a variant on the person's middle name, though in others it is an unrelated nickname. This phenomenon starts at the very top of MLB, with its commissioner, "Bud" Selig (birth name: Allan Huber Selig).

The quiz below tests your knowledge of the birth names of 50 MLB figures. Most of the players are fairly well known. A few questions should be very easy--if you don't know Chipper Jones' real name, shame on you--but some will be quite difficult. Shortenings (like "Will" for "William") and common nicknames (like "Jack" for "John") are not included; players whose initials are based on their first & middle names (like James Jerry "J.J." Hardy) aren't on the quiz, either.

I split the names up into smallish groups of 4-8. Except for group VII, which features 3 Josés, none of the first names are used more than once. All the players are known by a name other than their birth name, with the exception of 2 of the 5 Caseys in Group IX. 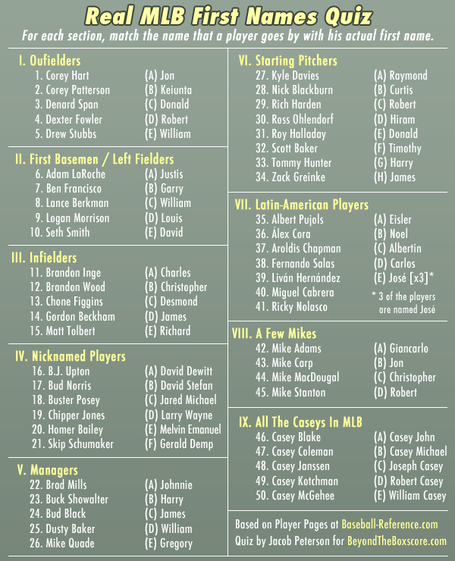 If you prefer a text quiz, you can find it at the bottom of this post. There's also a link to the answer key after the jump.

In case you are curious, here are a few more (mostly lesser known) players who go by a middle name:

Additionally, there's the strange case of J.D. Drew, whose real name is "David Jonathan." His initials should really be "D.J." Though I suppose I can cut him some slack, since I wouldn't want to share a name with one of the daughters from Full House, either.

Of the 50+ players and managers I found who go by an alternate name--far from a comprehensive list, I should add--here are the names that were most commonly switched away from:

And here are the names that were most commonly switched to:

Infer what you want from those lists. The names "Louis" and "David" were both switched to and switched away from.

Here's the text version of the quiz, if that's what you prefer: