Ranking Relievers: The BBWAA and wWAR Pretty Much Agree

Share All sharing options for: Ranking Relievers: The BBWAA and wWAR Pretty Much Agree

For the past few years, I've been consistently trying to figure out what makes a relief pitcher worth of the Hall of Fame. Before you can pick which relievers should be inducted, you need to rank them. And that's where it's tricky. What method do you use? Saves? Nope. Save percentage? Still flawed. ERA? ERA+? I swore by those in the past, but I've come around. Shutdowns/meltdowns? Getting there, but still doesn't accurately gauge career value. WAR? Probably the best, but even WAR is incomplete by itself (doesn't tell the whole story of peak performance vs. "compiling").

You guessed it! I'm going to use Weighted WAR (wWAR)!

The nice thing about using wWAR is it allows you to rank relievers using a single metric (one that adjusts "plain old" WAR for peak performance, postseason heroics, and more). For relievers, wWAR also handles seasons as a starting pitcher differently. Perhaps most importantly, wWAR  allows you to choose your own Hall of Fame baseline. Perhaps you believe no relievers should be in the Hall. Maybe you think only Mariano Rivera deserves it. Maybe you think Billy Wagner is a Hall of Famer. If so, you should open the doors for all relievers above him.

I'll be completely honest. When deciding which relief pitchers would go into the Hall of wWAR, I absolutely picked "The Wilhelm Line", meaning only relievers better than Hoyt Wilhelm's 55.0 wWAR would get in. That means just Rich Gossage and Wilhelm are in (with Rivera queued up). What about Dennis Eckersley? Well, he's an odd case. Let's just go to the graphic: 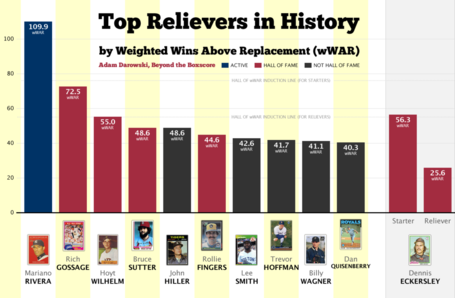 And here's a table of all relievers with 25+ wWAR.

What stands out to you? Which relievers would you put in the Hall of Fame?