Another Graphic Look at Redefining Most Valuable

Share All sharing options for: Another Graphic Look at Redefining Most Valuable 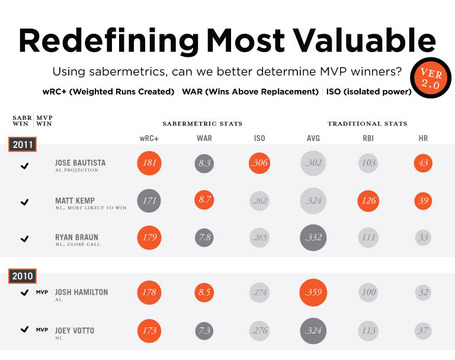 With the AL MVP being announced in mere hours, as requested by a few of our users, I've taken another look at who else could have won the MVP in their respective races. This time, using wRC+, WAR, and ISO, it shows a closer race between this years candidates (NL at least). You can see my previous graphic using wOBA, RC, and ISO here.

This year, I have Jose Bautista taking this one easily. Who do you think is going to win the AL MVP races? See more after the jump.

Lets look at the two behind Joey Bats, Jacoby Ellsbury and Miguel Cabrera.

But in the NL, the margin between Matt Kemp and Ryan Braun are slim. We'll mention Prince Fielder in there as good measure since his numbers were comparable.

Click on the image or here for the full size graphic. Check out FUNGraphs.tumblr.com or follow me @cobradave for more