Late Bloomers & Imports: The Best Players To Debut At 28 Or Older

Share All sharing options for: Late Bloomers & Imports: The Best Players To Debut At 28 Or Older

Whatever you think of the Twins' signing of Jamey Carroll (I like it), you have to admit that he's had a remarkable career. He was 28 when he made his MLB debut and 29 before he played semi-regularly. He's played really well since then, though, earning over 15 Baseball-Reference WAR.

The two graphs below show the best players, ranked by brWAR, who did not debut in MLB until at least age 28. Part 2 (after the jump) focuses on players who first appeared in a top-level professional league other than MLB. This includes the leagues in Cuba, Japan, and the pre-integration Negro Leagues. These players were kept from debuting for non-talent reasons, so I separated them into another group.

Part 1 features players (like Carroll) who played only in the minor leagues before reaching MLB. These players were generally kept out of MLB for talent or organizational reasons, though discrimination played a role in some cases (notably for Ed Charles). Here are the top 8 pitchers and position players: 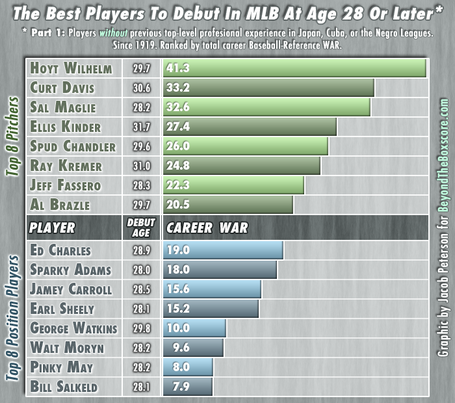 Carroll ranks fairly highly by position-player standards. He could easily end up number 1 on this list before all is said and done.

Clearly, being a late bloomer is a bit more common among pitchers. Not only do the pitchers have more WAR, but many of them also debuted later.

Next up, the players from Japan, Cuba, and the Negro Leagues, ranked by their MLB WAR: 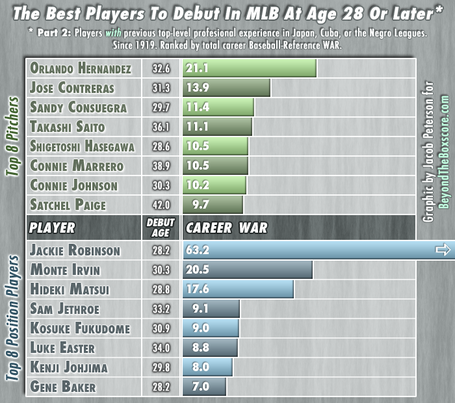 Jackie Robinson basically blows away the field. What a remarkable player (and person). He had 3 times as much WAR as anyone else on this list, and 22 WAR more than any other player to debut at 28 or later. He's one of only 2 players to make the Hall of Fame as a player after debuting at that age or later (Hoyt Wilhelm is the other).

There are many incredible careers on these lists, which makes sense, because you have to be a special kind of player to have a productive career starting at a late age. There are too many great stories to relay here, so I'll just recommend that you search them out on SABR's Bio Project or Baseball-Reference's Bullpen.