Projections Wrap Up: Looking Back at a Wild Ride

Share All sharing options for: Projections Wrap Up: Looking Back at a Wild Ride 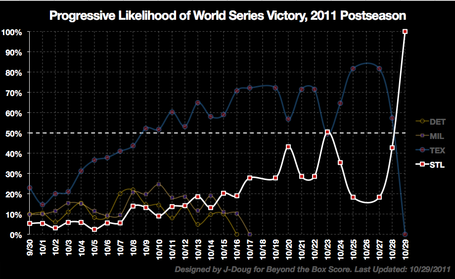 As you all know by now, the comeback kids really pulled it off. On August 24th, the St. Louis Cardinals were 10.5 games out of the playoffs. On September 5th, Baseball Prospectus pegged the Cards at 0.7% to reach postseason play. On October 5th, our Log5 model saw St. Louis as 2.4% shots to win it all. Despite all odds, Tony LaRussa, Albert Pujols, David Freese & Co. succeeded in winning their eleventh title last Friday night.

Nobody was more surprised than the Texas Rangers, who dominated October nearly wire-to-wire (nearly being the key adverb here). According to our Log5 projections, St. Louis was only the favorite to win it all on two occasions: first, after going up 2-1 in the World Series; second, after actually winning it all (no, I'm not going to pat myself on the back for calculating that one).

In fact, the Rangers' WS% averaged above 50% for the duration, while the Cardinals mean WS% was 21%, barely ahead of the Phillies whom they defeated in the first round (not counting most days on which their probability would have been 0%). So said our Log5 postseason simulator based on numbers from Baseball Prospectus. Analysis of the fan vote and more after the jump. 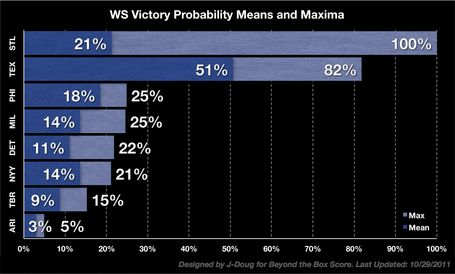 *Means only count one day after which the team was eliminated. Poor Diamondbacks, they never had a chance.

In many ways, the fans were smarter than our system. Below is a chart of the fan votes from every poll on every postseason projection post, starting on October 1. 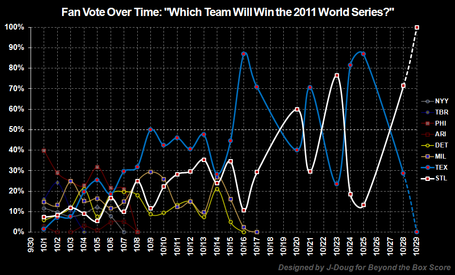 While we didn't have the Cardinals favored at any point until October 23rd, voting fans jumped on to the St. Louis bandwagon three days earlier. They also correctly predicted the Cards' win in Game 7, while the model did not. On the other hand, the fans were far more optimistic about the Phillies than the model was.

It was looking like an AL year all the way up until the end, despite the NL's World Series home field advantage. That'll happen when one of the best teams wins one league and one of the (presumably) worse teams wins the other. 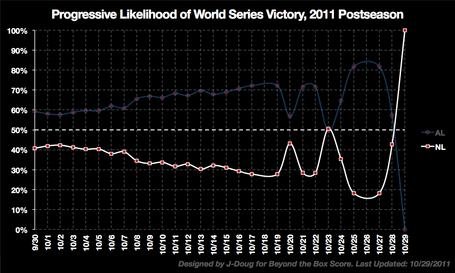 If there's one thing that each and every one of these graphs indicates, it's volatility. Volatility makes for exhilarating wins, debilitating losses and all-around general excitement. As the numbers indicate, this was one of--if not the--most exciting postseasons ever. Of course, you didn't need me or a bunch of graphs to tell you that.

I'd like to take this opportunity to thank you all for following along. I have every intention of re-running this series next season with another round of "if the season ended today" posts, probably with a few tweaks in the methodology. Enjoy hot stove season!