The Most Powerful Hitters in Baseball (The 2011 Power Factor Leaderboard)

Share All sharing options for: The Most Powerful Hitters in Baseball (The 2011 Power Factor Leaderboard)

Ever since slugging percentage ascended to the mainstream consciousness, some form of bases accumulated as a rate statistic has become a (if not the) primary means by which we measure power. Slugging percentage was a great start, but because a player who gets four singles is seen as just as powerful as a guy who hits one home run in the same number of at-bats, it fails to differentiate between players whose total base totals are high (or low) based on power or those that are inflated (or deflated) by contact skill.

The development of isolated power (slugging percentage minus batting average—i.e., extra bases per at-bat) was a step in the right direction in the quest to accurately measure raw power. ISO would show that our hypothetical four-singles hitter was not, in fact, as powerful as the batter who hit a home run. But ISO has a bias towards contact hitters too: the more hits a batter gets, the more extra-base hits he'll get:

But that’s not right. If Wayne somehow managed to bring his average up 150 points, would all the extra hits be singles?

My favorite example of this is the case of Carl Crawford and B.J. Upton in 2010. I don't think it's controversial to say that Upton has more raw power than Crawford, but ISO rated them as essentially equal (Crawford's was .188, Upton's was .187), and they had just about the same numbers of extra-base hits (Crawford: 62, Upton: 60). The reason: Crawford got 57 more hits and hit 70 points higher than Upton did. Tautologic as it may sound, he wouldn't have equaled Upton in extra-base hits had he not gotten so many hits. Thus, ISO does not really isolate power, but is largely dependent on contact ability, speed, and (in some cases) BABIP luck.

By changing the denominator from at-bats to hits, we can take ISO one step further and focus more specifically on raw slugging ability. It's impossible to fully isolate power from contact skill and luck, but their impact is much smaller on Power Factor than on ISO or SLG.

Power Factor has been around for decades as a tchotchke statistic and was originally invented by the great Earnshaw Cook. It's not a perfect stat by any means and it may go too far in trying to correct contact-hitter bias, but I love it for its simplicity, its instinctual and logical sense, and its strong year-to-year consistency (suggesting it truly measures a stable skill).

For qualified MLB hitters in 2011, the median PF was .621 and the standard deviation was .205. Here's a quick percentile chart for this year, like those offered in the FanGraphs Saber Library: 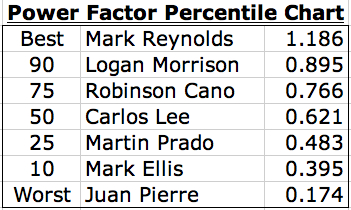 It should be noted that Power Factor isn't a very good measure of a player's overall hitting ability; if "hitting the ball hard" is the general key to extra-base hits, PF focuses only on "hard." Given the choice between a player with a high PF and a hitter with a high ISO or SLG, you'd take the second guy (unless you were playing T-ball). The former is a more powerful hitter, but the latter is a better power hitter.

Without further ado, here are the most powerful (qualified) hitters in baseball for last year, as determined by Power Factor. For comparison, I've also included each player's ISO. (input numbers courtesy of FanGraphs)

Overall, there isn't much difference between how most players faired in ISO and PF relative to their peers, but there are some exceptions. Here's what the relationship looks like. I've highlighted a few notable names and outliers. Note that players above the line are rated more highly by PF than by ISO (and thus were below-average at the non-power aspects of getting hits), while those below the line have their slugging abilities overstated by ISO. 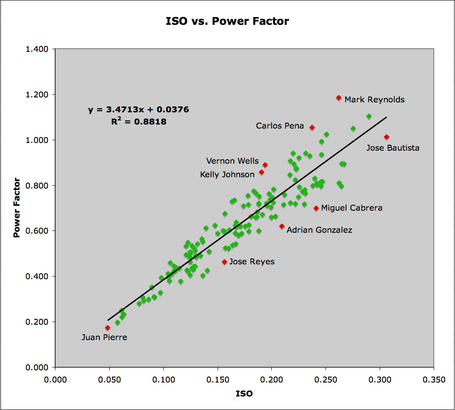 Again, Power Factor shouldn't be the only stat you use to measure raw slugging ability, but I think this paints a pretty accurate picture of who the most powerful hitters in baseball are.