Share All sharing options for: A Graphic Look at Redefining Cy Young 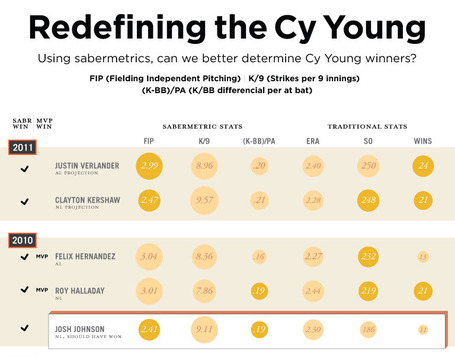 To go along with a piece I did two weeks ago about taking a different look at MVPs, lets take another look at past Cy Young winners and see if there's some better metrics we can use to determine quality or worth. Unlike the previous study, it's been harder to predict as winners have one anywhere from one to all of the six categories. To go with basic units of measure, ERA, SO, Wins, the three advanced metrics we'll be looking at is:

Were there generalizations to be made? Read more after the jump.

All I could take away from looking at this from a high level is that most winners or candidates that should have won, had really good (K-BB)/PA numbers, and generally were also leaders in FIP (in most years, under 3.00 FIP, with the exception of 2006-2007).

So who were good candidates according to have won? The most recent was Josh Johnson last year and CC Sabathia in 2008. I know, it's highly debatable right?