The Most Valuable Part-Time Players of All Time

Share All sharing options for: The Most Valuable Part-Time Players of All Time

Growing up in the late '80s and early '90s, I had a fascination with part-time players. For instance, one of my favorite players to watch was Rafael Belliard. Even then, I had no illusions about these types of players. I knew that Belliard couldn't hit worth a lick, which is why he didn't play more. But still, I loved him, and other players like him who weren't good enough to be regulars but still hung around MLB for a long time.

One of my favorite moments from my teenage years was seeing Belliard hit his second (and final) career home run, ten years after he had hit his first. There's just something magical about a guy who looked like a teddy bear with a mustache hitting a ball over 300 feet, or about a player with a career OPS+ of 46 hanging around for 17 seasons.

In tribute to Belliard and those like him, I present the Most Valuable Part-Time Players of All Time. I had to split catchers up into their own group since they make up a disproportionate amount of the data set. 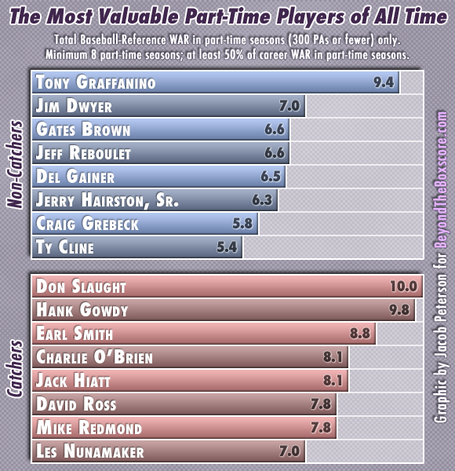 The only active player on either list: the Braves' backup-catcher extraordinaire David Ross.

Methodology and more info after the jump.

I started by finding all non-pitchers who had at least 8 seasons in which they had received between 1 and 300 plate appearances, which is my arbitrary definition of a "part-time season." Mainly, the 8-season restraint was just out of practicality. As the season requirement is lowered, the number of players in the pool increases exponentially. I ended up with 483 players in the data set. Had I included players with 7+ part-time seasons, there would have been 800 players; at the 6+ season threshold, the player total rose to over 1200. And so on.

The 8-season minimum does have a benefit, though, in that it requires a player to have hung around long enough in a part-time role that he is usually best associated with that role (as opposed to a regular who just spent a few years in that role at the start & end of his career).

Still, there were a few players in the pool who I thought of more as regular players. For instance, Lonnie Smith had 8 seasons with under 300 PAs, and he earned 6.1 WAR in those seasons, which technically put him 7th in the non-catcher category. But really, he was just a regular who had a couple extra part-time seasons. Smith's career WAR of 37.2, including 8 seasons with 500+ PAs, makes this quite clear.

To avoid this issue, I required each player to have earned at least 50% of his career WAR in his part-time seasons. This eliminated Smith, Ron Karkovice, and Tim McCarver, among others, but overall, the top of the leaderboards weren't affected much.

The total WAR values in the graphic above include only the WAR accrued in part-time seasons. For instance, Graffanino topped 300 PAs in 4 seasons, during which he earned an additional 4.6 WAR (for a total career WAR of 14.0). These seasons aren't included in the total. A few players were unaffected by this because they never once had a season of 300+ PAs. Most notably, Jim Dwyer spent his entire 18-year career as a part-time player, which is an MLB record.

Why So Many Catchers?

You may have noticed that 8 of the top 10 overall part-time WAR figures were put up by catchers. Why do they have such a stranglehold on part-time play?

Well, there are two reasons. For one, every team needs (at least) one dedicated backup catcher, whereas other backups are nearly always required to cover more than one position. This means that backup catchers are in higher demand, making it easier for a relatively poor player to hand around for a long time.

Secondly, "backup catcher" is the role at which hitting skills are least emphasized (outside of pitchers, obviously). Nobody expects a backup backstop to hit well, so long as he calls a good game and is solid defensively. This allows many more one-dimensional players to make big league clubs.

Related to this second point, catchers get a very large positional adjustment due to the difficulty of finding ones who can hit well. This makes it harder for them to accrue negative WAR (though it's far from impossible, as you'll see below).

For Fun: The Least Valuable Part-Time Players of All Time

Over 40% of the players in the sample ended up with a negative Part-Time WAR. These are the worst of the worst. First up, non-catchers:

Last season, at age 39, Juan Castro posted a 0.0 WAR in 15 PAs. Remarkably, that ties for the 2nd-best Baseball-Reference WAR in his 17-season career. His best mark was a 0.1 WAR in 5 PAs in his rookie year, way back in 1995. He's had a negative WAR in all 14 seasons in which he received more than 15 PAs. Not only is that a record, but it's not even close; no one else has more than 11 such seasons. It might, in fact, be an unbreakable record.

Lest anyone think I'm just ripping on Castro, let me be clear: I think that record is fantastic. It's not Castro's fault that he lacks the talent of many of his peers, but it is certainly to his credit that he persevered, kept himself in good shape, and convinced so many teams to give him some playing time. Most players with his skill set fade from the scene far more quickly. We should all congratulate him on having one of the more improbable 17-year careers in MLB history.

I'm also just now realizing that I missed out on Castro in my post last week, on active players who have worn lots of uniform numbers. He's worn 10 different numbers, which would place him in a tie for second on that list. I figured I would miss out on somebody (there's no good way to search for # of uni numbers worn), but I'm surprised he ranked so highly. After all, he's only played for 5 teams.

And now, the catchers:

As you might have guessed, Luis Pujols is no relation to Albert.

I hope you enjoyed this tour of the best & worst part-time players by career value. Perhaps I'll do something with peak value as well at some point.