Share All sharing options for: Measuring Pace of Games Using Time Per Pitch

It has become a bit of a cliché to say that Red Sox and Yankees games take longer than any other games. It is true, though--the Red Sox led MLB with an average game time of 3 hours and 13 minutes, with the Yankees second at 3 hours and 8 minutes. The question is: why?

I've often heard that it makes sense for the Red Sox' games to take longer. After all, Red Sox hitters led MLB this year in plate appearance and pitches per plate appearance. Overall, Red Sox batters saw 600 more pitches this year than the 2nd-place Yankees batters and 1827 (7.7%) more than the MLB average. Combined with the fact that Red Sox pitchers weren't exactly efficient, throwing 569 more pitches than average (2.4%), you would expect the Red Sox to have fairly long games.

If we assumed that each game featured the same number of pitches, however, would the Red Sox still have the longest games? The graphic below shows how long it took each team, on average, to play 291 pitches worth of baseball (291 pitches is the average amount per game). 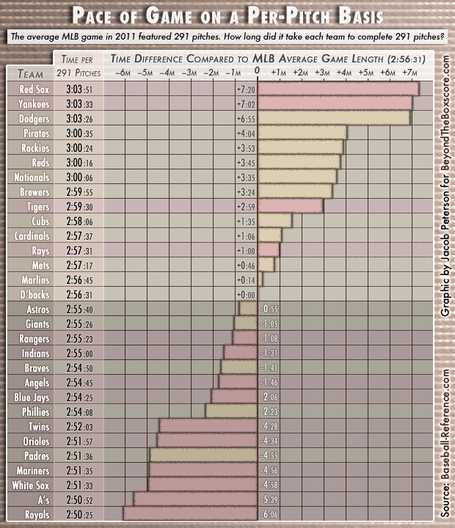 The Red Sox do still have the slowest pace, though just barely. Once you remove the effect of extra pitches, their games are "only" about 3 hours and 4 minutes long, more than 9 minutes shorter than the actual total.

What makes up the rest of the difference? The Yankees and Red Sox both played in a large number of national telecasts. Since these games tend to take a bit longer, this could influence their numbers. There could also be differences in umpiring in these games (i.e., less enforcement of game-speed rules). And of course, there's the obvious answer that these teams could just have more deliberate pitchers and hitters, or more trips to the mound and times stepping out of the batter's box.

Another explanation for the slower pace of some of the teams at the top of the list could be extra pitching changes. Teams who play higher-scoring games or whose managers mix-and-match more (*cough*Fredi Gonzalez*cough*) tend to experience more pitching changes (and thus more commercial breaks, etc.). These added breaks aren't included in the per-pitch adjustments. For instance, Red Sox games featured more pitching changes (by and against Boston) than the games of any other AL team. The Yankees placed second in the AL by this measure.

You can actually see the effects of pitching changes in another way on the graph above. I've put the two leagues in different colors (AL in red, NL in yellow) to highlight the fact that most of the slow-paced teams are in the NL. Of the 15 teams whose per-pitch paces are at or above the MLB average, 11 are in the NL. Overall, NL teams had averaged 2 and half minutes more per 291 pitches than AL teams (2:57:40 for the NL, 2:55:10 for the AL).

To me, the most surprising team on the slower-than-average part of the graph is the Dodgers. Their games ranked 11th in the NL in terms of pitching changes, so that doesn't explain anything. I can't think of any other reason why their games would be particularly slow. Yet slow they were--almost as slow as the Yankees' or Red Sox' games, in fact. If any Dodgers fans have ideas about this, I'd be very curious to hear them.

This would seem to indicate that there is a strong correlation between team quality and the pace at which the team plays... except that there is no correlation whatsoever on the NL side. Sure, the Padres sucked, and they were the fastest-paced NL team. But the Phillies were the second-fastest and they had the best record in the league. The Braves and Giants were 3rd- and 4th-fastest, and they were pretty good, too. Meanwhile, the Pirates were terrible, but they had the 2nd-slowest-paced games in the NL.

This study confirms that the number of pitches thrown is a large factor in the length of games, but it is clearly not the only factor. In addition to the mysterious mentioned earlier, the data in this post isn't controlled for the unbalanced schedule, different lengths of commercial breaks on various networks, and many other factors. By eliminating the effects of the number of pitches thrown on game length, however, it does at least provide a start in this search.