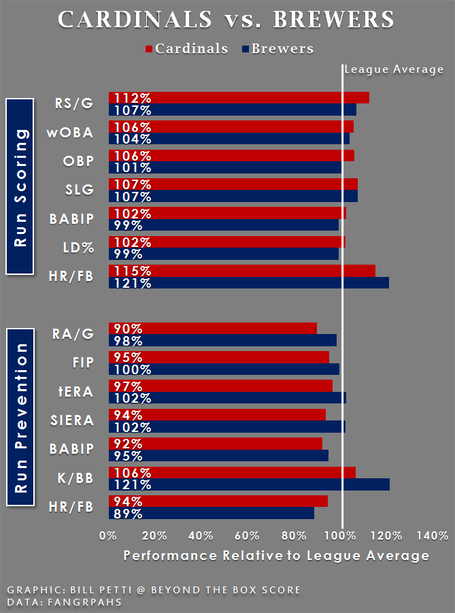 Today at 4:05pm EST, the Cardinals and Brewers will square off in Game 1 of the National League Championship Series.

The Cardinals have emerged as the giant-killers of this post-season, sending the Philadelphia Phillies and their vaunted rotation home in the first round. The Brewers, meanwhile, managed to defeat the Arizona Diamondbacks on a 10th inning walk-off hit by Nyjer Morgan.

Comparing these teams statistically, they are pretty similar. Both teams sport above average offenses and score runs well over the NL average. Both teams can get runners on and drive them home with power. The long-ball is not foreign to either club.

The Cardinals finished six games back of the Brewers during the regular season, but they were only expected to finish two back given their expected records. The Cards had a bit more pop offensively, while the Brewers were better at run prevention.

On the year, the Cardinals did not hit the Brewers well. They hit below the league average against them, and only hit worse against the Padres in the National League. Things didn't get much better when they played at Miller Park, managing an sOPS+ of only 84.

This is a tough series to pick. On the one hand, the Brewers appear to have plenty of offense and better pitching to take the series. However, their home-road splits are hard to ignore. Against the Diamondbacks in the NLDS, the Brewers run differential was +9 at home and -11 in their two games on the road.

There is a part of me that really wants to pick the Cardinals here, but I think the Brewers have greater starting pitching depth and match up well against the Cardinal hitters.

If the Brewers can hold serve at home in the first two games, they have a great shot at heading to the World Series. If the Cardinals grab one game, I think the advantage quickly swings to St. Louis given the Brewers problems on the road.

My prediction: The Brewers starting pitching gets them out to a 2-0 lead in the first two games, Brewers hold on to win in seven games.