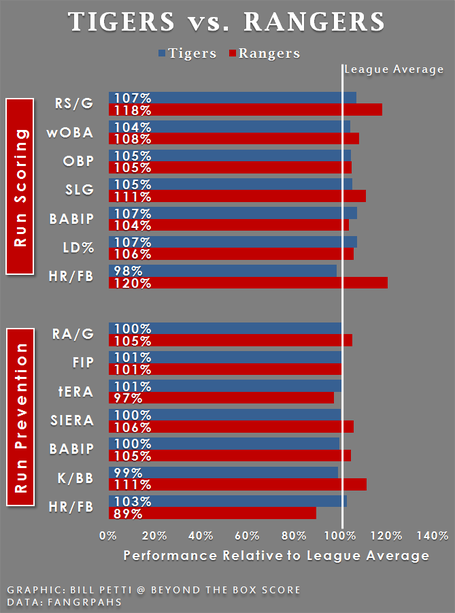 Tonight at 8:05pm EST, the Tigers and Rangers will square off in Game 1 of the American League Championship Series.

Tigers's ace Justin Verlander will take the ball in Arlington for Detriot and will face a terrific Rangers lineup. That lineup was arguably the best in baseball next to the Boston Red Sox and New York Yankees (who the Tigers sent home in five games).

The Rangers offense was 18% better than the AL average this past year. Partly, that's a function of their ballpark, where they average over 6 runs per game. However, the lineup is definitely viable away from Arlington, as they scored 4.4 runs per game on the road. In the case of Detriot, though, the Rangers offense fizzled, combining for an OPS+ of only 83 in their six games there this year.

The Tigers were no slouchers on offense, either, scoring 4.9 runs per game. However, the Rangers clearly have the advantage in this series when it comes to run scoring.

What about run prevention?

On the year, the Rangers appear to have been better in this area as well. However, the pitching staff's of both clubs has changed a bit since August. For one, Detriot now boasts Doug Fister as an outstanding compliment to Verlander. Over the last 30 days, Fister's Fielding Independent Pitching (FIP) is only 2.04, and his Expected FIP only 2.18.

The Rangers ousted the Rays in 4 games, but their run prevention was far from stellar. The Rays scored 21 runs over four games, and the Rangers actually had a negative run differential for the series (-5). C.J. Wilson, the Rangers Game 1 starter, was chased by the Rays early in the ALDS after giving up 3 home runs and 6 earned runs in only 5 innings.

Wilson was tremendous on the year, so as with many things in the playoffs we can chalk that up to randomness, just as Verlander's performance against the Yankees was far from what we would have expected and should expect in this series.

The key, as with the last series for the Tigers, will be the extent to which they can limit base runners and home runs by the Rangers. The Tigers did a pretty good during the regular season, but not so great against the Yankees. (As a team, the Tigers actually had a -11 run differential for that series). The Tigers were a bit better than average at preventing home runs, but Verlander and Fister posted HR/FB ratios of 8.8% and 7.5% respectively. However, those ratios jumped when pitching on the road. That's not good news given how home run friendly Texas can be.

Given that the Rangers hold home-field advantage, it will be harder for the Tigers to pull this off over seven games. They will have to take at least one game on the road, which they proved they could do against the Yankees and their vaunted offense, and hold serve at home. The Tigers won the regular season series against the Rangers, 6 games to 3, and posted a +5 run differential. More importantly, they took two out of three games in Arlington. However, the Rangers averaged 5 runs per game in those three games, scoring 7 runs twice.

I still think the Rangers are the favorite, but given it's a seven-game series I think these teams are closer than some, and the seasonal statistics, may suggest. Verlander and Fister were two of the most consistent starters in all of baseball this year, so the odds are the Tigers will get good to great starts from them throughout the series.

Still, the Rangers hold home field, and that might be difference maker. I'll say the Rangers advance to the World Series, 4 games to 3, but it's a very close series.