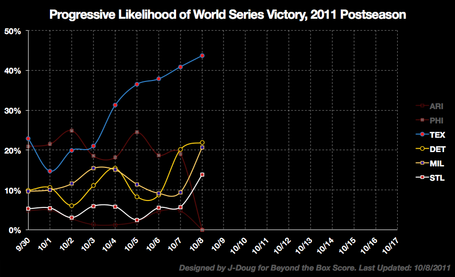 What a way to follow up the craziest regular season finish in history but with the wildest LDS in a generation.

Three of the four series went five games--something that hasn't happened since 1981--and all three games were decided by a single run. The St. Louis Cardinals upset the Philadelphia Phillies thanks to masterful pitching by Chris Carpenter, and the Milwaukee Brewers are heading back to the LCS for the first time in nearly three decades thanks to Nyjer "T-Plush" Morgan's extra-innings walk-off against the Arizona Diamondbacks.

The early departure of the Phillies and Yankees is welcomed by the Texas Rangers, who host the Detroit Tigers tonight in the first game of the ALCS. We have the Rangers as heavy 3:5 favorites to take their second consecutive pennant and 9:7 to win their first World Series. So says our Log5 postseason simulator based on numbers from Baseball Prospectus. Raw numbers and figures of note after the jump. 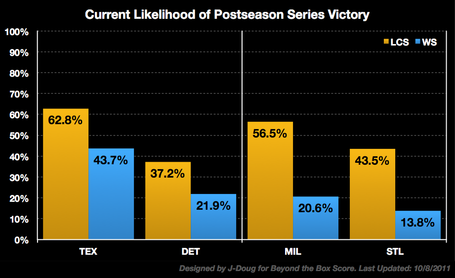