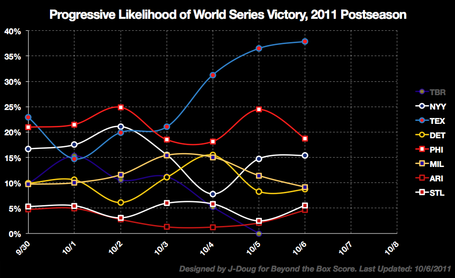 If, at the start of the postseason, you had bet me that two AL teams would be eliminated before any NL teams, I probably would have taken that bet—and lost. If you had told me that the over/under on the number of games in which the Phillies faced elimination was one, I would have seriously considered taking the under—and lost that bet too. All because the Cardinals and Diamondbacks refuse to surrender, we're headed for three Games Five in the first round.

We have the Yankees as ~57-43 favorites over the Detroit Tigers in tonight's winner-take-all game in New York. In tomorrow night's games, we project the Philadelphia ~62% over St. Louis and the Brewers ~58% over Arizona. So says our Log5 postseason simulator based on numbers from Baseball Prospectus. Raw numbers and figures of note after the jump. 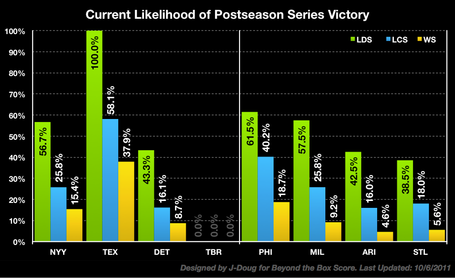