Share All sharing options for: The Cardinals' David Freese Had The Best 3 Consecutive PAs Of 2011

With baseball done for the year, it's worth reflecting on one of the most remarkable displays of timely hitting in postseason history: David Freese in Game 6 and Game 7 of the World Series. Specifically, the 3-at-bat stretch that he had from Game 6's 9th inning through Game 7's 1st inning.

Freese's total WPA in those 3 consecutive at-bats was a staggering 1.13. And he did it at the most opportune time imaginable, with his team on the brink of elimination. But even taking his performance out of context, it is still the most impressive series of at-bats in 2011.

It's quite rare to have 3 consecutive PAs with RBIs that significantly impact the game, much less ones with as great of an impact as Freese's. Only 9 players this year had 3 straight plate appearances with at least 1 RBI and at least a +0.10 WPA in each PA: 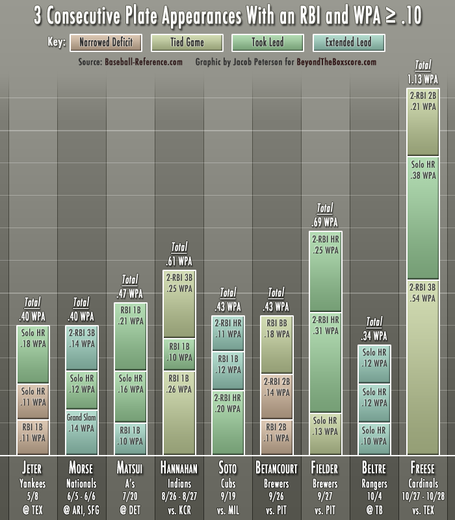 1st PA: Yankees down 4-0 with 0 outs in the 3rd inning; Jeter hit an RBI single off David Bush.

3rd PA: The score is now tied 4-4; with 0 outs in the 7th, Jeter hit another solo homer, this time off of Arthur Rhodes. The Yankee offense would explode for 7 more runs and a 12-5 win.

1st PA: The Nationals had just taken a 5-4 lead in the top of the 11th; Morse hit a 2-out grand slam off of Joe Paterson for some insurance. The Nats won 9-4.

2nd PA: The next day, Morse led off the 2nd inning in a scoreless game; he hit a solo shot off of Tim Lincecum.

1st PA: The A's were already leading 1-0 and had the bases loaded with 2 outs in the 3rd; Matsui hit a swinging-bunt infield single off of Duane Below to score a run.

2nd PA: Tied 2-2 going into the top of the 5th, when Matsui pops a leadoff homer off Below.

1st PA: With the Indians trailing the Royals 1-0 in the bottom of the 7th, Hannahan tied it up with a 2-out RBI single off Felipe Paulino. The Indians won 2-1.

2nd PA: Hannahan breaks a scoreless tie in the bottom of the 2nd with another 2-out RBI single, this time off of Danny Duffy.

3rd PA: The Indians trailed 3-1 in the 4th when Hannahan got another 2-out hit, this one a 2-run triple off Duffy that tied the game. The Indians won 8-7.

1st PA: The Cubs trailed 1-0 with 0 outs in the third inning. Soto hit a 2-run homer off Chris Narveson to give the Cubs the lead.

2nd PA: The score was still 2-1 with 1 out in the 4th when Soto hit an RBI single off Narveson.

1st PA: There were 0 outs in the 4th and the Brewers trailed 4-1; Betancourt hit an RBI double off Charlie Morton.

3rd PA: With the deficit cut to 8-7 and 2 outs in the 6th, Betancourt drew a bases-loaded walk off of Chris Leroux to tie the game. The Brewers couldn't complete the comeback, though, and lost 9-8

1st PA: The next day, the Brewers trailed 1-0 with 2 outs in the 3rd; Fielder hit a solo shot against Ross Ohlendorf to tie it.

2nd PA: In the 5th, the Brewers trailed 3-2 when Fielder hit another 2-out blast off Ohlendorf, this one a 2-run shot that gave the Brewers the lead.

3rd PA: The Pirates had tied the game at 4, but with 0 outs in the 7th, Fielder hit another 2-run homer off of Jared Hughes. This one provided the final margin of the Brewers' 6-4 win

1st PA: The Rangers led 1-0 in the 2nd; Beltre hit a solo shot off of Jeremy Hellickson with no outs.

2nd PA: Now the Rangers led 2-1 with 1 out in the 4th; Beltre hit another solo homer off Hellickson.

3rd PA: Again the Rangers had a 1-run lead, 3-2, and again Beltre hit a solo homer, this one off Matt Moore leading off the 7th. Beltre's WPA is hurt by all the homers being solo and coming with his team already in the lead, but there's little doubt that he was the main force behind the Rangers' 4-3 victory.

1st PA: You know this story, but I'll recap it anyway. The Cardinals trailed by 2 with 2 outs in the 9th when Freese hit a tying, 2-run triple off Neftali Feliz.

2nd PA: Two innings later, the game was tied 9-9 when Freese led off the 11th with a solo, walkoff home run off Mark Lowe.

3rd PA: Freese picked up where he left off in the 1st inning of Game 7; he hit a 2-run, 2-out double against Matt Harrison to tie the game at 2. The Cardinals didn't look back, adding 4 more runs and winning comfortably, 6-2. They almost certainly would not have done it without Freese's incredible run of heroics.

Even without considering larger context, Freese's stretch is clearly the best; he's the only one with a walkoff hit and the only one with a tying, late-game hit. Of the others, I think Fielder's is second-best, thanks to the dominance of 3 homers and the fact that all 3 were either game-tying or go-ahead jobs. Which one you prefer among the others is probably just a matter of taste.

If you consider the larger context, Beltre's 3-homer game obviously rises above most of the others, though again it wasn't nearly as impactful as Freese's 3 PAs.

Really, it's pretty remarkable that 2 of these stretches happened in the playoffs. The odds of that are astronomical. Hitters had qualifying PAs (1+ RBI and at least .10 WPA) in 3.8% of their plate appearances this year. So the odds of a hitter having 3 straight such PAs are about 1 in 18,600. There were about 2900 PAs in the playoffs this year, yet it happened twice. Just one more reason to appreciate the awesomeness of the 2011 playoffs, I suppose.

By contrast, the regular season was a bit light on these stretches. We'd expect around 10 based on the odds above, but we only got 7. And only 4 of those came before mid-September. The Brewers really tried to make up for lost time, though; their pitchers helped Soto to his excellent stretch, and then Betancourt and Fielder did it on back-to-back days in the last series of the year against the Pirates. The odds against something like that happening to players on the same team on consecutive days are huge, obviously. Though perhaps less huge when you consider how the Pirates struggled toward the end of the season.

At any rate, David Freese was clearly the MVP of this metric, just as he was the MVP of the World Series. Congratulations to him and the rest of the Cardinals for accomplishing the highly, highly improbable.