Share All sharing options for: Projections Update: Ignore These Projections 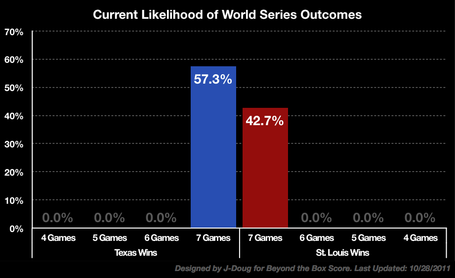 Notwithstanding David Freese's Fiskian performance in last night's wild sixth game, the Rangers have a better-than-even chance of besting the Cardinals. So says our Log5 postseason simulator, based on numbers from Baseball Prospectus, about the first World Series Game Seven since 2002.

And now that you've read that, forget it. Why? I'll tell you, after the jump. 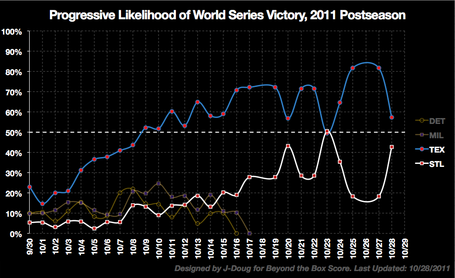 This is, rather ironically, the least useful example of a Log5 expectation: when the whole season comes down to one final game. There's scant information this (or really, any) method can impart to us about which team will be the history maker: the incoming favorite that has never won it all, or the historic power that was once more than ten games out of playoff contention.

We are no longer in the realm of simple probability. What we are effectively dealing with is Schrödinger's Cat, or perhaps more aptly, Schrödinger's Team. We now live in a quantum realm where Texas' and St. Louis' title hopes are both alive and dead simultaneously. It is our very observation of the final out that will collapse the wave function (and possibly the Rangers' bullpen) and present us with one of two realities.

In other words, just watch the game. Watch history in the making.