Share All sharing options for: A Pitch F/X Analysis of Danny Hultzen

With all the excitement surrounding this year's playoffs, it is easy to forget that The Arizona Fall League is in full swing and it features the first two picks in this years draft, Gerrit Cole and Danny Hultzen. Two of the six team's stadiums are also equipped with Pitch f/x cameras, allowing for us to take a closer look at these future stars. I had originally intended to focus on Gerrit Cole and Danny Hultzen, unfortunately for this analysis' sake, Cole has yet to pitch in one of the stadiums equipped with Pitch f/x, so we'll focus on Hultzen,

Dannny Hutzen was drafted out of the University of Virginia by the Seattle Mariners with the 2nd overall pick in this year's draft and is currently pitching for the Peoria Javelinas. Below is a video of Hultzen warming up at a Fall League game, notice the hitch in his wind-up and his unique delivery which allows him to keep the ball out of the batter's line of sight longer than the average pitcher.

While Hultzen has not logged enough innings to get anything meaningful from his statistics, we can look at some of the Pitch f/x data collected from his starts to provide some insight. Pitch f/x has captured 163 pitches that Hultzen has thrown over two of his three starts. I re-classified Hultzen's pitches and found that he has been throwing  a four-fastball 46% of the time, a two-seam fastball 28% of the time, a change-up 22% of the time and a slider 2% of the time. Both his fastball average a speed of 92.5 MPH and his slider and change-up both average speeds of 82 MPH.

Let's start by looking at Hultzen's average pitch trajectories for each pitch. 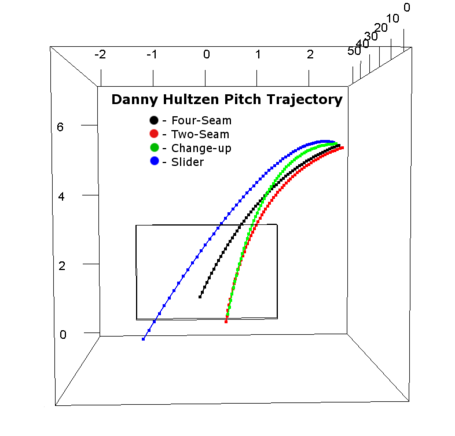 Hultzen, who is 6 feet 2 two inches, has an average release height around 5 feet 4 inches, a lot lower than the MLB average release height of 6 feet for lefties between 6 feet and 6 feet 3 inches tall. His change-up and two-seam fastball have good drop on them, but as we'll see later, he has been having some trouble locating those pitches and getting consistent movement. His slider and change-up have similar trajectories for the first 20 feet or so, adding another layer of deception on top of his unique wind-up and release point.

From here we can look at where Hultzen has been locating his pitches. The vertical locations for this chart have been normalized to account for the batter's height and the pitch types have been reclassified using a clustering algorithm. The points are grouped by both pitch type and the result of the pitch. Due to the small amount of left handed batters faced (7), I only plotted Hultzen's pitches to righties.

This is all from just 8.2 of  the 12.2 total innings that Danny Hultzen has pitched in professional baseball. The Arizona Fall League is about giving players extra time to develop and hone their skills, and statistics are not reliable indicators of future performance. However, the Pitch f/x data allows us to visualize players whom we have only read about in scouting reports or seen on YouTube.

Hultzen has had some control problems in this small sample, but I would  imagine it is all part acclimating himself to a new level of play. He has also faced a disproportionate number of right handed batters. As a pitcher who gains some of his edge from keeping the ball out of the batter's line of sight, he is expected to perform worse against righties since they can see the ball out of the pitcher's hand earlier than lefties. Of the seven lefty batters Hutzen has faced, none of them have gotten on base.  It will be interesting to see how Hultzen develops his pitches and see if his unique throwing style will throw off professionals as it did college hitters.

Graphs were made in R using the RGL and ggplot2 packages