Share All sharing options for: Are Patient Hitters Better Hitters?

I for one always assumed that, on average, players with higher on-base percentages (OBP) would see significantly more pitches per plate appearance (P/PA). It seemed intuitive that higher OBP was the result of walking more and that resulted from greater patience at the plate. My assumption was that variation in OBP should be explained to a large degree by P/PA.

A few weeks ago I learned that isn't the case. Generally speaking, only a small percentage of the variation in OBP can be explained by P/PA.

So much for assumptions.

To dig in deeper I ran some correlations between P/PA for a number of other metrics, just to get a better sense of what outcomes are driven by or related to working pitchers. Here are the results: 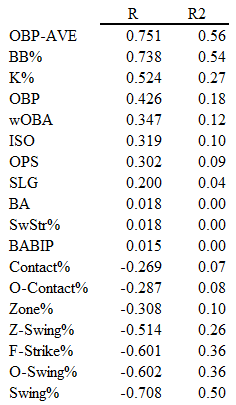 Moreover, like many of the plate discipline statistics, P/PA is quite stable year over year. For the same time frame I looked at hitter's individual seasons and correlated their P/PA in year one to their P/PA in year two. That correlation is .81 and ranks 6th among the previous metrics I looked at.

Making a pitcher work is valuable, but from an individual hitter standpoint it doesn't necessarily make the difference between an average and elite offensive player (OPS R2 is on .09 and wOBA is .12). Moreover, while accumulating pitches at a team level is advantageous, you have to combine the degree to which a player is personally responsible for making a pitcher work with the additional pitches they also force a pitcher to throw based on not making an out. In a follow up post, I will look at whether OBP or P/PA is more valuable in terms of making opposing pitchers work.