Rating Hitters By Passiveness And Aggressiveness

Share All sharing options for: Rating Hitters By Passiveness And Aggressiveness

I love plate discipline statistics*. You can learn so much about a hitter's personality from things like how often he swings at pitches out of the strike zone (i.e. O-Swing%). For this post, I somewhat arbitrarily defined a couple terms to help describe hitting styles using these stats:

Both rates are out of all pitches. The graphic below identifies the hitters that rate the highest in each of these two categories using Baseball Prospectus' plate discipline numbers (which I prefer to FanGraphs' because they are based on PITCHf/x data). The graphic also shows which hitters have the most and least "passive-aggressiveness," which is just the sum of the Passiveness and Aggressiveness. 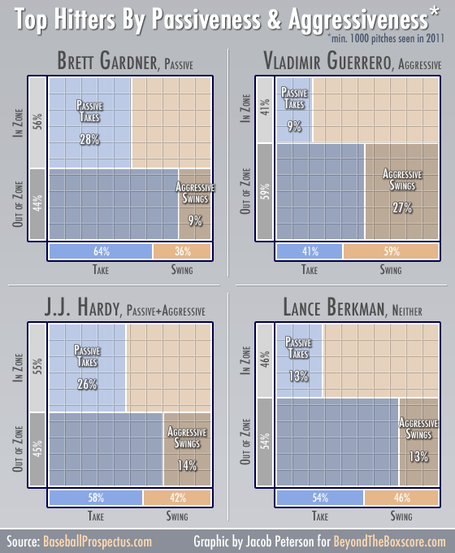 I break down the top 15 players in each category below.

Before we get into the lists, it might be helpful to provide some averages for the 2011 season.

The lists below are based on the 289 hitters to see at least 1000 pitches.

The Most Passive Hitters

In case you are curious, here's how I calculated Passiveness:

Here are the top 15 most passive hitters by this metric:

I think it's fair to say that, though a very high Passiveness does not automatically prevent a player from getting good offensive results, those extra strikes add a degree of difficulty for a hitter.

The Most Aggressive Hitters

In case you are curious, here's how I calculated Aggressiveness:

Here are the top 15 most passive hitters by this metric:

These players are all over the place. Some of them were fantastic in 2011 (Sandoval, Hamilton, Cano, Carlos Gonzalez) while others were among the worst hitters in baseball (Olivo, Alex Gonzalez).

Overall, 10 of the top 50 most Aggressive hitters posted a .350 wOBA or higher (plus the 51st and 52nd, too). That top 50 also included some truly execrable performances, though. Clearly, being Aggressive doesn't preclude great hitting, but just as clearly, not just anyone can do it. The players who are successful with this sort of approach seem to be freakish athletes whose physical skills allow them to make solid contact on a much wider variety of pitches than most players.

The Most Passive-Aggressive Hitters

This is calculated simply by adding Passiveness to Aggressiveness. Here are the 15 highest sums:

As you can see, there weren't too many successful hitters in this group. Cuddyer is the only player in the top 30 to post a .350+ wOBA, and he was only at .354. Three of the top 50 met that threshold (Cuddyer plus Sandoval and Jose Reyes).

You may have noticed that most of these players seemed to post roughly average marks in one category and sky-high marks in the other. Overall, only 14 hitters (out of 289 with at least 1000 pitches seen) were above-average in both Passiveness and Aggressiveness, and most of those just barely qualified. No hitter was above both 21% Passiveness and 16% Aggressiveness.

This makes sense if you think about it, because a hitter wouldn't be able to stay in the big leagues for long if his plate discipline were so bad that he took many more strikes than average and swung at many more balls than average. You can get away with one or the other, but not both.

Finally, let's take a look at the players who rated the lowest in Passiveness + Aggressiveness. Here are the 15 lowest sums:

This is by far the most impressive group so far. More than half of these players posted a .350+ wOBA (Berkman, Peña, Ortiz, Joyce, Quentin, Swisher, Cabrera, and Hart). Iannetta and Jones didn't miss that mark by much, either. Out of the top 50 in this category, 18 reached the .350 wOBA threshold. That's 36%, compared to 23% at or above .350 for the entire sample.

Posting a low mark in this category didn't guarantee success--see Ordonez's hellish season--but it does seem to correlate with solid all-around performance. It's pretty clear to me why this would be. Posting low marks in both Passiveness and Aggressiveness is an indication that the player is both recognizing the difference between balls and strikes and taking the appropriate action--swinging at the strikes and letting the balls go. If you do those two things and have major-league physical tools, you should be pretty successful.

It's pretty telling, then, that the players on this list who did not have good season with the bat are either on their way out of the big leagues (Ordonez, Cust) or just breaking in (Lowrie, LaPorta). These players' physical tools are either abandoning them with age or haven't yet developed to be MLB-caliber--if they ever will. In the meantime, their plate discipline will likely allow them to get more MLB playing time than they otherwise would.

If you want to know where a favorite player ranks in any of these areas, let me know in the comments and I'll try to respond. Thanks for reading.

* My only wish is that there were a bit more granularity to the plate discipline data. How cool would it be if we could someday compare players' swing rates on just borderline strikes or borderline balls, rather than all pitches in or out of the zone? A fan can dream, I guess.