Batted-ball statistics like groundball-to-flyball ratio (GB/FB) have become a standard part of baseball analysis, and not just for sabermetric types. There's so much more that can be done with this batted-ball data that just GB/FB ratio, however.

For example, the Retrosheet Batted Ball Location Codes used by Baseball-Reference indicate not just the type of batted ball (FB, GB, LD) but also the location where it is hit (depth and position). For fly balls and line drives, the location is marked as where the ball is caught or where it first hits the ground*, which allows us to get a pretty good sense of how deep each ball is hit.

I looked at the depths of the fly balls and line drives hit off of four important NL pitchers. These four are (arguably, anyway) the aces of the NL playoff teams: Roy Halladay of the Phillies, Zack Greinke of the Brewers, Ian Kennedy of the Diamondbacks, and Chris Carpenter of the Cardinals. Here's what I found: 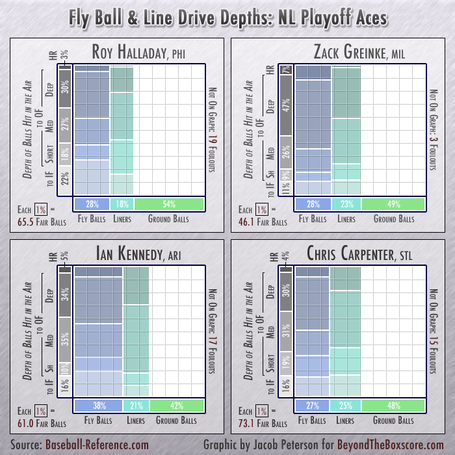 Each square on a grid represents 1% of the batted balls hit in fair territory off of a pitcher. The horizontal sidebar gives the batted-ball breakdown for the pitcher (by GB, LD, and FB). The vertical sidebar breaks down the balls hit in the air into 5 categories: infield, short outfield, medium outfield, deep outfield, and home run. The higher on the chart, the farther the ball traveled in the air.

More breakdown after the jump.

Roy Halladay really stands out from the other pitchers (surprise, surprise). Batters hit relatively few balls in the air against him (only 46% of fair balls), and when they do hit it in the air, they don't hit it as far. A whopping 22% of balls hit in the air off of Halladay stayed in the infield, including 48 of 180 fair fly balls (27%). That's simply incredible. Fewer than 1/3 of balls hit in the air off Halladay made it as far as the deep outfield--only 99 total all year. That's a large reason why Halladay gave up only 10 homers all year (2nd to Matt Cain's 9 among qualified starters).

You probably know that Halladay led MLB in FIP this year. He didn't lead in xFIP, though--that honor went to Zack Greinke. Greinke may have had a relatively high 3.83 ERA, but his strikeout and walk numbers were fantastic. In fact his (K-BB)% was even higher than Halladay's. Greinke struck out 28% of the batters he faced and walked 6%, while Halladay struck out 24% and walked 4%. So why was Greinke's ERA so comparatively high?

His fly ball depth chart explains at least part of the difference. Over half--54%--of balls hit in the air off Greinke made it to the deep outfield, with 7% leaving the park entirely. Greinke had nearly 200 fewer batted balls than Halladay, but he had 21 more balls hit to the deep OF and 7 more home runs. Only 11% of balls hit in the air off Greinke stayed on the infield--half of Halladay's rate. Since air-balls that stay on the infield are almost always outs, and balls hit to the deep outfield are fairly likely to be extra-base hits, this had a huge adverse effect on Greinke's numbers.

Along these lines, another huge difference between the two is that Greinke recorded only 3 foulouts all year (not included in the graph, which is only fair balls). By contrast, Halladay recorded 19 foulouts; the other 2 aces on the chart each had 15 or more foulouts, too. That's 10+ outs that Greinke lost out on compared to his peers.

Chris Carpenter's batted-ball profile is a bit weird, with nearly as many line drives as fly balls (possibly a classification issue). Regardless, he did a pretty good job of limiting the depth of his fly balls and line drives. Only 4% went for homers, and just 30% made the deep outfield. Those numbers are right up there with Halladay's, though Carpenter only kept 16% of balls in the air on the infield, compared to 22% for Halladay.

You can do lots of other things with this data. For instance, you could tweak the home run/fly ball formula to only account for deep fly balls (or deep fly balls & deep line drives). After all, it doesn't make much sense to think of infield fly balls as potential homers. Here are the HR/DBIA (homerun per deep ball-in-air) rates for each of the four pitchers above:

Greinke, Kennedy, and Carpenter all fall right in the 13% range. I haven't done the research for all pitchers, but I'd imagine that the league average is right around there. Halladay's 10% rate indicates that either he got lucky on his deep batted balls or that he was able to get batters to make weaker contact even when they hit the ball very well in the air. Normally, I'd lean toward the "luck" aspect, but he's Roy Halladay. I'm pretty sure he can do whatever he wants.

Something else that might be useful is a ratio of deep fly balls to infield fly balls, as a simple measure of how hard fly balls were hit off a pitcher. Here's the DFB/IFFB ratio for each pitcher (using just fly balls, but you could include liners too). Lower is better.

Here again, Halladay is in a class all his own. Kennedy also rates well, followed by Carpenter. As for Greinke... well, he obviously had trouble with his fly balls this year. I'm sure some of that is just bad luck, since his infield fly ball rates have been average in his career but were well below average this year**.

I'd be interested to hear what those who have followed Greinke's career think of these numbers. Did he actually get hit much harder this year? Perhaps he had problems with one of his out-pitches? I'm just theorizing, but I'm sure there's more research that can be done on Greinke's weird year.

Regardless, it should be fun to watch Greinke and these other excellent pitchers ply their craft in the postseason. Even if I will be crying on the inside throughout (Yeah, I'm a Braves fan.). Happy playoffs, everybody.

* For balls hit in the air but are not caught, other sites, like MLB's Gameday, mark the location where a ball is fielded, not where it lands. That is less useful for our purposes here.

** There's also possibly a classification issue. All batted-ball classifications are somewhat subjective, and as such they aren't fully reliable. There's a decent-sized margin of error in other words. I wouldn't take any of the numbers in the post as solid proof of anything. I do think they still provide an interesting picture of each pitcher's batted-ball profile, though.